Congratulations to Lavonne Roach who is NOW FREE!  We met up in Las Vegas for a huge hug and to celebrate with her amazing daughter Clarissa who worked hard to help bring her mother home. 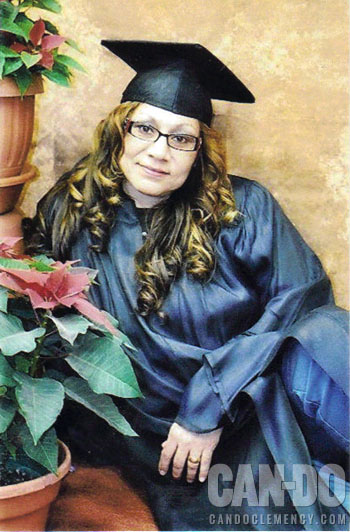 Those who know LaVonne talk of her kindness and intelligence as well as her spirited optimism and hard work while in prison for 17 years. LaVonne Roach is a Lakota Sioux woman from South Dakota currently serving a 30 year sentence for Conspiracy to Distribute Methamphetamine. She has been at FCI Dublin since March 1998 and has been involved with the Four Winds Group since then. She has been the spokesperson for the group for several years.

LaVonne has rebuilt herself from a pre-prison existence that is hard to fathom if you haven’t been there – an unremitting tale of alcohol, drugs, poverty, violence and  abuse starting at age 11. LaVonne doesn’t deserve a second chance. She needs a first chance – a first chance to live in peace, to care for her ailing parents, to love her children, to help care for grandchildren who hardly know her.

I have 3 children, 2 daughters and a son. Clarissa, my oldest, has 3 girls; Priscilla my youngest daughter has one daughter; Edward, my son who is my baby, has 2 boys and a girl.

When I was in FCI Dublin, I participated in the CHOICES program for about 5 years and met a lot of high risk teens. The response was different from these teens. Some believed that prison only held murderers and rapists. Others? I could tell when they had somebody incarcerated in their family. One teen said “People who made bad choices” were locked up. All the teens that visited the prison thought it looked like a school campus. I know that when I first arrived to start my 30 year sentence I couldn’t believe how green the grass was with all the pretty flowers and trees. But I found out quickly that it isn’t so much being behind the razor wire fence. Yes, many of us have been subjected to inhumane conditions and treatment, but to me the real punishment is not being able to hold my children when they cry or not being able to be there when my father passed away, or helping my mother who is experience health issues with her heart . I can’t be by their side to help in the last days of my parents lifes. I have missed 18 years of my childrens lifes and am now missing out on the lifes of my grandchildren. That is the cruelest punishment, I believe, one can experience. It’s emotional and psychological torture.  We made bad choices in our lifes, many of us were slaves to our addictions, but it doesn’t make us bad people. The federal prisons are filled with nonviolent drug offenders, that have left their children without the nurturing of a mothers love, left to grow old alone in these inhumane conditions, which is a whole other issue in FCI Waseca.

What happens to LaVonne’s kids when mom is sent away for 30 years rather than, say, three years for her non-violent drug law violation? Drug war orphans is what happens.

Here is a poem by Lavonne’s daughter Clarissa:

I can’t see her or touch her but I know that she is there. Not being able to hug her makes life so unfair.
They said she was gulity and said now she will pay.
So they sent her to a place far far away. They took her from her family and everything she loves. Her children ,they cry and ask God,Why? She feels so much pain and sits all alone. It is a dark dreary place that she now knows as home.
She’s asking for help but they don’t want to hear. Her life is in danger, is my biggest fear. I feel helpless, I break down and cry. Please God, help her, Please don’t let her die! She’s crying, the pain, what can I do? She’s so far away, but I feel her pain too.
They took all she had and still they wanted more. They’ll keep taking and taking till there’s nothing, no more.
I wish I could hold her and be her bright light, take care of her, just soothe her and pray for her all day and night
I remember her smile, so strong and so bold. And now, I see sadness in the pictures I hold. I miss her and love her, “She” is my mom. To everyone else, “She” is better known as a number, 10431-073.
Mom, I miss you and know you’re in pain. I pray for you, Mom and my prayers stay the same. I pray for the day you will be free. The day its all over and at home, you will be.

The government’s “orphan creation” strategy ensures that young Clarissa, Edward and Priscilla will never have an intact family again. To test the policy’s wisdom, predict how that will turn out for the kids — and society.

I have been locked away for 19 years as my children grew. My family has suffered many hardships and deaths during that time.

I have a granddaughter who is older than my son was when I came to prison. My parents are old. My father is being placed in an old folks home because he broke his hip and has other issues (severe diabetes, dialysis, oxygen machine, going blind, heart problems, and an amputated leg.)

My mother has been having problems with her heart and is unable to care for my dad.

Nobody can really understand the hurt I feel knowing that they are suffering and I can’t help them because of bad choices I made in my life.

I prayed before my sentencing and prepared myself. Honestly, I never believed I would do this much time. I thought justice would prevail.

But here I sit 17 years later.

Kylee is the toddler in the blue outfit in 2000 and the young woman in the white blouse in 2013.

See What I See
Writing by LaVonne Arlene Roach

Down trodden, addicted and poor
“evil drug dealers,” victims of the war
a sacrifice, a facade for all to believe

The abused, persecuted and afflicted,
victims of the war on drugs
Stripped of dignity
Stripped of a belief in justice
Their lives…the final sacrifice
Doomed behind the razor wire of isolation,
loneliness and despair

Women hoping for justice
Just someone to care
Someone to see