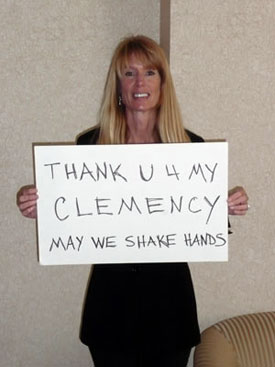 My husband, Derek, and I attended the 2008 California Democratic Convention in San Jose, so I could network and pursue support for my CAN-DO women seeking clemency.  Since the convention coincided with the race for the Democratic presidential nominee between Hillary Clinton and Barack Obama, things got pretty interesting, including the bombshell that President Clinton had decided in the eleventh hour to attend the convention as a speaker on the last day ~ March 30th.

“Whoooa!” I thought. “Possibly a chance for me to meet my all-time hero and thank him in person for granting my clemency!” I immediately began to fantasize about how this might become a reality. The evening of the 29th, I went around collecting signs that had been cast aside – carefully choosing ones that were blank on the back that could be customized into a sign that I’d wave from the crowd at President Clinton…if, the opportunity presented itself.  In the hotel room, with a magic marker, I made several signs, trying to cons 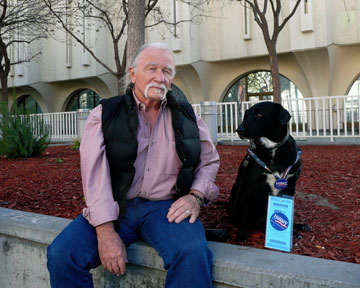 truct one in as few letters as possible in hopes of catching Clinton’s eye.

The next morning, I got up early, determined to get a seat on the front row of my district.  No sooner was I seated, a female “spotter” came to check my badge and noted that I was a lowly “Observer.”  Not an issue – until today.  My attempt to justify my seat was met with a blank stare.  So, I picked up my sign, sandwiched between two Hillary for President posters, and followed her finger to the section way, way, way in the back – approximately two miles from the stage – or so it seemed.  Already, my potential big day was turning into a disaster.

In the meantime, Derek was walking Dorje, who was also a Hillary supporter, but was segregated due to her canine lineage.  Within 20 minutes, Derek (who by the way is neither Democrat or Republican because he’s disappointed with both) arrived with the hordes of Democrats, gearing up for the big showdown between the Hillary and Obama supporters.  The two opposing forces were mobilizing, some with homemade posters the size of Texas.

By now, I’d spied what appeared to be two Secret service operatives on the north side of the room, beside a curtain that led backstage.

From my vantage point, it appeared as if they held the keys to the kingdom of Clinton.  Soon, I was pleading my case, begging for an opportunity to thank President Clinton for granting my clemency.  “Can you get that message to him?” I asked.  Come to find out, these were junior ‘wanna be’ secret service afraid to make a decision for fear it would be the wrong decision, so I was told to join a handful of anxious looking suspects standing along a roped area at the bottom of the stage.

About ten minutes after the opening speaker was introduced, some people with phone cords in their ears arrived to shoo everyone off the ropes.  Each person, in turn, tried to justify why they were there. “I was to 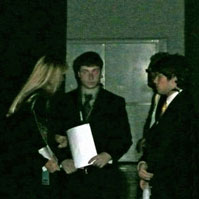 ld to stand here!” I insisted.  Back and forth people appeared and disappeared behind the curtain until the final decision was made – “EVERYONE MUST LEAVE THIS AREA!”

Temporarily defeated, I retreated back to the Observation section and along the way teased a handful of Obama advocates by waving my Hillary poster behind enemy lines.

Then, some Hillary confederates marched by recruiting people to join their procession that would circle around the auditorium and come to rest near the stage when President Clinton was introduced.  Couldn’t be more perfect than if I’d written it into a screenplay.

When President Clinton took the stage, the Obama demonstrators had evaporated out of respect for our esteemed speaker and we Hillary people were planted to the right of the podium – not a good position for my objective because Clinton would exit in the opposite direction! I scanned the room, searching for new options.

“Follow me,” I told Derek and within minutes we were seated on the floor of the main aisle in front of Clinton’s podium. 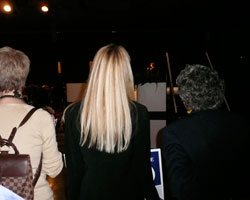 I couldn’t help but smile, thinking this could never happen at a rule-abiding Republican convention, while Derek scoped out the best possible option for two squatters and moved us as close to our target as possible.

Predictably, Clinton delivered an energizing speech, sharing memories that he and Hillary had experienced during their careers – names of people who’d been personally touched by something the Clinton’s had done.  I was one of those people – listening to the very man who was responsible for my happiness.  If not for him, I’d be enslaved until 2012, working for pennies an hour at a UNICOR prison factory!

Post speech, Clinton turned to shake hands with a panel of peers, while I made a b-line for the rope.  Clinton waved a final farewell, but his intention to leave was overcome by a desire to connect with the little worker bees of the Democratic Party.  Demeanor melting in resignation, Clinton descended onto the convention floor, briefly looked my way and I could have sworn he’d focused on my sign, but he moved down the rope, shaking hands in the opposite direction – toward the exit.  Still, I held fast to my coveted front-row spot – a wise decision.

When Clinton got to the end of the line, he turned and said, “Who had that sign?” triggering an eruption of glee from yours truly.  He walked over and asked my name. “Amy Pofahl,” I said, giving the previously married name I’d been indicted under. 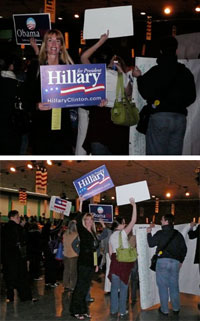 “I remember your case,” he said, but I launched into a pre-planned discourse to better identify myself, in case he didn’t remember that I was one of the first drug cases he’d released on July 7, 2000, long before he left office. “Just like Hillary’s book, It takes a Village,” I rambled in a non-stop string-along sentence, “everyone in my hometown of Charleston, Arkansas helped by signing petitions and writing letters, but Senator Bumpers and Senator Pryor (both from Arkansas) played critical roles and eventually 15 politicians wrote letters supporting my clemency…”

At that, President Clinton gave me a hug, probably to shut me up, and said, “I hope you’re happy,” to which I chirped that I was happily married and living in Malibu. “Is your husband here, I’d like to meet him,” Clinton indulged me.

Unfortunately, Derek had moved down in search of a better photo-op position.  Due to the crush of people that ensued, these are the only photos he captured.

Desperate to find someone who might have caught the interlude, I took the card of a photographer who said to check his website in a couple of days ~ but there was nothing.  Back in Malibu, I decided to google a combination of words related to Clinton and the Democratic convention, but came up empty-handed, until, I tried, “Clinton hugs blonde.” Bingo!  Someone named Zennie had posted it on Youtube under a provocative title.

“Oh no!  This can’t be good,” I thought, especially when I read that Zennie likened the hug to a “Monica Lewinsky moment!”  After watching the clip, it was clear to me that Zennie was a latecomer – because he missed the conversation leading up to the hug, plus his description of events was far from accurate.  In fact, if he’d merely asked about the incident, as did several others, I would have explained, verifying the story with my sign.  I posted an explanation on Zennie’s blog, but he never corrected his original comment.  Regardless, I must give credit to Zennie for capturing this clip of the day I met my hero – the man who liberated me, and my family, after 9 years and 3 months of much pain and suffering.

THANK YOU PRESIDENT CLINTON FOR BEING A GENUINELY COMPASSIONATE MAN – IN ACTS AND DEEDS – NOT JUST WORDS!
GOD BLESS YOU!