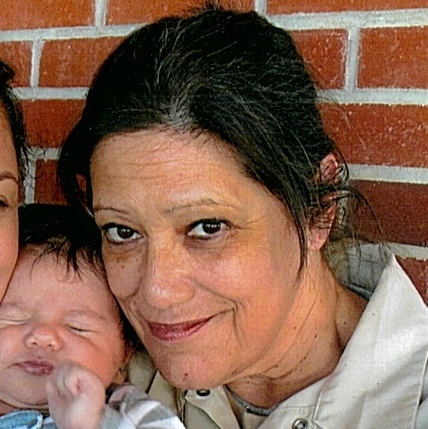 Irma was released on Oct 30th and moved to Corpus Christi, Texas to live with her family.  Thanks to Drugs Minus Two, she got 70 months taken off her 30 year sentence.

Irma Alred is NOW FREE and called Amy Povah to say hello while she drives with her sister from Tallahassee to Corpus Christi, Texas to be with the rest of her family – the first person she called was her mother!

After Irma received the “Drugs Minus Two” sentence reduction she sent the following email to CAN-DO:

I JUST WANT TO LET YOU KNOW OF MY NEWS.I RECIEVED A 2 LEVEL REDUCTION OF 70 MONTHS.MY SENTENCE WAS 364 MONTHS WHICH I HAVE SERVED OVER THE 20 YEARS MARK.THEY REDUCED IT TO 294 MONTHS SO THATS 70 MONTHS ,I SHOULD BE GOING HOME SOON .I HAVE TO WAIT AND SEE WHAT THE HALFWAY HOUSE DATE IS.I AM EXCITED AND CANT BELIEVE IT .FIRST THING I DID WAS CALL MY MOM!!!!I AM STILL NUMB.LOVE YOU ALL.

Congratulations to Irma and all her family members.

Irma has served 21 years on a 30 year sentence for Conspiracy do Distribute Marijuana.  1 prior for pot that required probation only, on a state case. Everyone involved in this case is home except for Irma, including people who were admittedly more culpable than she. Numerous co-defendants had long criminal records but got no time or drastic reductions for testimony against Irma. This case grew out of a lot of people who were already in prison who wanted a sentence reduction and agreed to testify against Irma and her husband for leniency. That’s not to say that Irma claims to be completely innocent, but she is not guilty for everything she was accused of.

I have 2 beautiful kids, Tania is 33 and Antonio is now 31. They have grown up without me and I am so proud of them, and yet, so sad for all I’ve missed.

I am bilingual and have worked in UNICOR for the past 18 years, including overtime, which allowed me to pay ALL my fine off that was $25,000. I have learned skills such as electrical, plumbing, carpentry, tiling, networking, punching down lines of communications, painting, even landscaping. I have an apprenticeship in electrical that took me 4 years to earn. I have also learned how to be a medical assistant and was able to teach it along with hemodylisis in English and in Spanish. I love working with leather and have taught leather classes for the past 19 years to students in the beginners and advance stages, in both English and Spanish. I am a volunteer for the inmate suicide program and also go out to speak to troubled teen with the Choices Program.  Only a few select inmates are allowed to go and I am only five who were chosen.

I have donated to several causes in the past years like raising $$ for the breast cancer; I have donated leather to help The Human Solution,and other causes like the pre-release program in Pensacola Florida, Toys for Tots and several others.

I have a serious health issue (brain tumor) that required surgery. I just came back from the hospital with 16 coils placed on the last aneurysm. I have a total of 36 coils on the right side and 7 on the left side.  The coils are wires that feed into the artery that the aneurysm is on. I will have to go back to have another angiogram to see what and how everything is doing in the brain so in 30 days I will be back in the hospital to see how the coils and stents are doing. I am still having some double vision but not as bad. These procedures are all new so they really don’t know how much this will help but I am thankful to be alive.

I am allowed to work in the prison administration building as an orderly to see if i am well enough to work my previous job, which I enjoy. This is an opportunity that was given to me and I don’t take it lightly because only 5 inmates are selected to work in the administrative building. I thank the staff for allowing me this opportunity but I also would like to go back to doing what I know best which is maintenance, fixing everything that is broken on the 250 acre prison grounds. That requires a gate pass for both jobs and I have earned one, which says a lot about my credibility. I try to learn as much as possible so that when I do go home I will not have a problem finding employment.

I stay positive and do positive things. When I was sick and had double vision, I took up a class that teaches drawing, painting, sketching, so I could chalange myself to get better and learn another hobby craft. that in itself forced me to not give up on my vision. That was very scary but I never gave up. I still have a bit of a problem with my vision but I am getting better. I feel I have earned the right to go home and get to know my kids and grandkids along with the rest of my family.  I was too far away for them to afford visits for a long time and even with constant phone calls, I know I was not there when they grew up and needed me. My daughter is going to have a baby boy in November and, once again, I will not be there for such an important moment in her life.  I have a great family and thank God for them. I have been in prison for the past 21 years and would like a second chance at life. I have a lot more self-confidence that I did not have before and I want to use the skills I have developed in prison to to create a new life for myself and to be an asset to my family and society.

I feel it is worth noting that the attitude toward marijuana has changed drastically. Many people are now earning a lot of money growing and selling marijuana in states where it has been legalized, so I think it should be a consideration as to whether I am considered worthy of this great privilege of clemency. Even if i was guilty of everything I was accused of doing, I don’t think a 30 year sentence is a necessary punishment, especially since everyone involved is now free.