The appointment of retired Army General Mark S. Inch to head the Federal Bureau of Prisons (BOP) is a major blow to those working for prison reform under Trump. Attorney General Jeff Sessions announced on August 1, 2017 that Inch would be taking over the position. In the past, Inch has been responsible for detainee operations in Iraq and Afghanistan, which have been plagued by accusations of torture and abuse. Looking at Inch’s record, many prison activists and formerly incarcerated people expressed alarm that his appointment will likely lead to worsening conditions in the future. 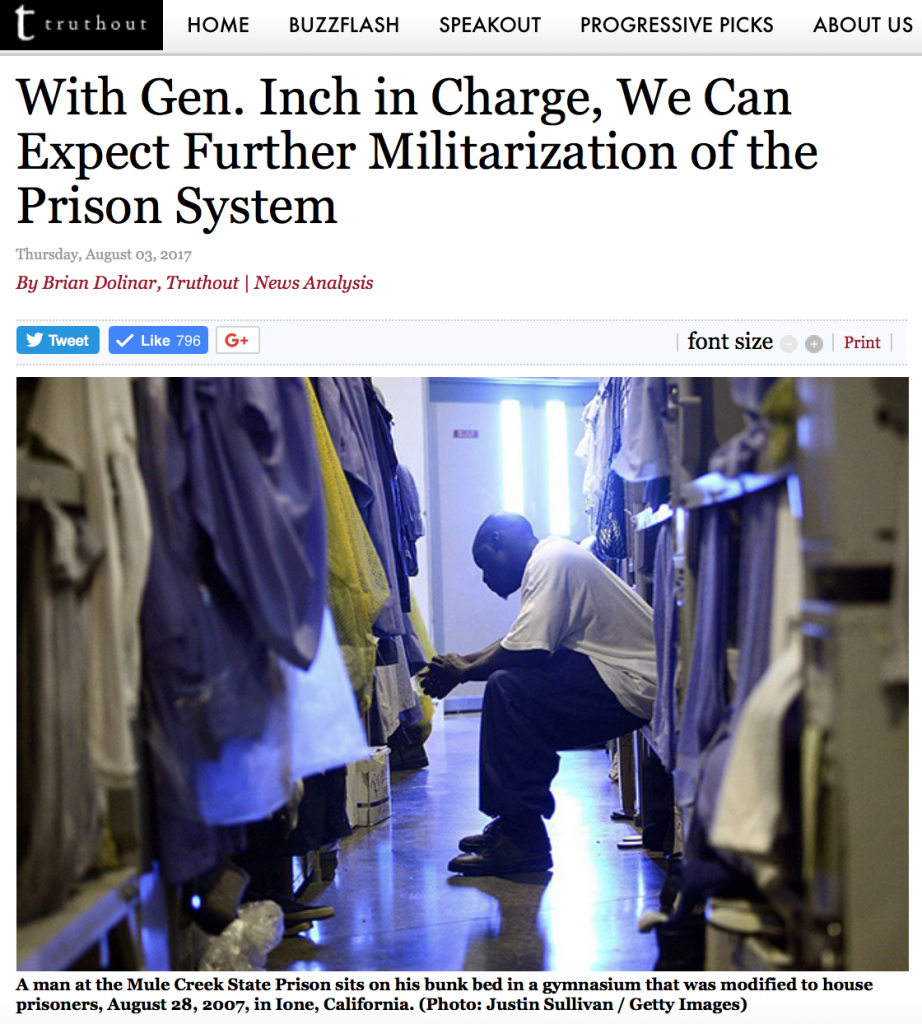 Truthout spoke with Amy Ralston Povah, who served nine years in federal prison before being granted clemency by President Bill Clinton. After her release, she founded CAN-DO to secure executive clemency for those convicted of drug offenses in federal prisons. She said that Inch’s appointment signals the further “militarization of the Bureau of Prisons.” US citizens, she said, are viewed by prison authorities as “combatants” who have no rights to defend themselves. Read the entire story here…

When asked to respond to Gen. Inch’s appointment, people I spoke with who have spent time in federal prison in the US noted that a military culture already exists inside most prisons. Beatrice Codianni spent 15 years in a federal facility and now is managing editor of Reentry Central, a website of criminal legal resources. She told Truthout that, in her experience, the “majority” of corrections officers (COs) had come from the military, and prison officials would recruit at military bases. “These COs had a military attitude that was abrasive and condescending and brought many, many women to tears,” Codianni said. Under Inch, they will likely become “even more aggressive.”

Former political prisoner Susan Rosenberg had her sentence commuted by Clinton and was released after spending 16 years in federal prison. She is the author of American Radical: A Political Prisoner in My Own Country. There is an “increasing connection,” she wrote in an email to Truthout, “between the military-industrial complex and the prison-industrial complex.” She pointed out that UNICOR, the Bureau of Prison’s work program, sells many of its manufactured goods to the military. In the future, she said, we can expect to see an increase of “slave labor” working for military contractors, and the use of solitary confinement and torture. General Inch, she added, is the “perfect person” to carry this out.