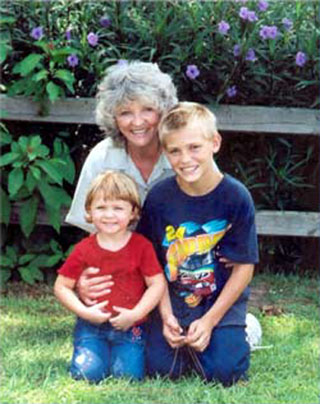 Shirley Womble is serving a 25 year sentence for “Conspiracy to Distribute Marijuana,” although she never sold or distributed the drug. Shirley’s husband, Willard, engaged in the sell of marijuana. Several arguments occurred due to his decision to engage in illegal behavior because they made decent money with their legitimate business, Womble Auto Sales, and Shirley did not want their well being jeopardized. The extent of Shirley’s involvement consisted of counting some of the money that Willard earned from marijuana, and she was present on a few occasions when Willard met with certain co-conspirators. Because Shirley was the bookkeeper for Womble Auto Sales, the government alleged that Shirley handled the bookkeeping for the marijuana business as well, although there was never any tangible evidence to support this allegation. Before this, Shirley had never even received a speeding ticket.

Shirley did not believe in divorce, and because they had two children she wanted to hold the marriage together, but their relationship had deteriorated to such extent they were sleeping in separate bedrooms when they were indicted.

Shirley says that she was clueless about the judicial process and relied on the advice of her husband and his attorney. This led to the common mistake that is called a “conflict of interest” that often occurs when a couple is indicted together. As Shirley sums it up, “I was represented by counsel that was controlled by my husband. I virtually had no way to defend myself because my counsel made decisions that were in the best interest of my husband, who was paying for his services. I asked my attorney to file a severance motion on my behalf and it was even mentioned in Court. The Judge told my attorney that he did not have a severance motion before him and to file one. My attorney never filed it.”

The only evidence provided against Shirley was testimony from co-defendants who had multiple prior convictions, were major distributors of marijuana and received leniency for their testimony and assistance to the prosecution.

The greatest reason why I respectfully request clemency is based on my desire to be reunited with my loving family. My remorse and grief over my decisions are indescribable. I’ve lost 13 years with my children. My son, Ray, had a serious and life threatening automobile accident shortly after my incarceration that left him unable to walk, feed himself, dress himself or manage the simplest of daily tasks. Today he has recovered to the point that he is able to work. He has attempted to raise his small son on his own and has done a marvelous job considering some of the difficulties due to his limitations from the accident. I desperately want to provide him with the assistance he needs to make life less challenging and difficult.

I lost the last years of my father’s life. I was very close to my father and grieve over the fact that I was not with him during his final years. He suffered immeasurably and constantly asked to see me during his decline but this was impossible as I was in the medical facility at Carswell, Texas having surgery during the worst phase of his illness. I returned to the federal prison in Mariana, and my father died the following month. I was allowed to go to his funeral with an escort, which is rarely granted for someone who has as much time left as I do. I believe this decision was based on the fact that I have such excellent rapport with the staff at this facility. The fact that I could not see my father before he died, or be by my mother’s side after the funeral are painful memories that I blame myself for.

My mother is now 78 years old and is for the most part home bound. She has many ailments that come with being elderly and she is painfully aware that she has lived the majority of her life. I cannot find adequate words to express how much I want to pamper and dote on her the way she deserves. I regret that I didn’t spend more time with her, but I never could have imagined that I would lose my freedom for almost 25 years. My mother is anxious for me to live with her in the event my clemency is granted and I pray that that privilege will become a reality.

Charlene, my loving daughter, is a nurse and has given me two grandchildren during my incarceration, the most recent on May 3, 2004. I regret that I was not there to help her with the birthing process. I got to visit my new grandson on May 8, because my daughter desperately wants me to bond with her children. I am a grandmother who has never been allowed to play or visit with my grandchildren, except within the confines of a prison. Sometime I feel such incredible remorse and shame that I have brought this burden upon my family in any way. I forever yearn to join my family and participate in daily activities. I want to contribute to their lives in a positive fashion, rather than being a burden and I’d like to have the opportunity to play with my grandbabies before my health declines to the extent that I won’t be able to keep up with them.

I pose no threat to anyone whatsoever and I have so much love in my heart for my family. I desperately want to be in a position where I can apply my love in a positive way. This is probably not the strongest reason for granting clemency, but I can honestly say it is the single most important reason why I hope and pray that my petition will be considered meritorious and ultimately granted by the President.