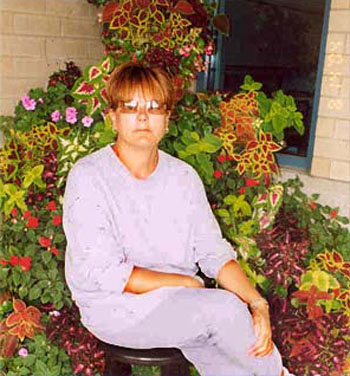 Santa’s early background and experience as Regional Sales Manager of Andiamo Luggage and then Vice President for a major sports bag company provided the experience she needed to start a successful trademark company that she worked hard for and was proud of. The turning point in her life and career happened the day she received a ‘cease and desist’ letter from the law firm of a huge oil company.

Santa Chiappetta started a business called FINO, Inc. that was registered with the Patent and Trademark Office. She obtained numerous business contracts to market products under the brand name of FINO and FINO FUTURO. A contract with “Barmani” made FINO the “exclusive distributor in the United States” of all Italian leather goods by Renato Balestra, signed on June 25, 1990. Documentation verifies that additional contracts were signed with the Plaza Hotel, San Souci, and others.

On November 22, 1993, the law firm of Oliff and Berridge sent Santa Chiappetta a “cease and desist” letter from Fina Oil and Chemical Co. to stop doing business under the trademark of FINO. They believed it was an infringement of their trademark, which is not spelled the same, nor was the font-style similar. McBride, Baker and Coles was the law firm Santa had used to handle her corporate documents, agreements, licensing, etc. She hired them to defend her in the Fina lawsuit. She incurred huge legal expenses and had to pull all FINO merchandise until there was a settlement. Conversely, Fina Oil did not pull their merchandise, which is less than 1% of their annual income (such as wallets and key-chains sold by catalogue or in service stations) and they incurred no hardship.

In the interim, Santa had to start a new company called CHILL and her existing FINO contracts were placed in jeopardy or rendered null and void. CHILL was a successful business that focused primarily on sports bags, throw blankets, T-shirts, caps, and small leather goods.

In April 1997, Mr. Gentile approached Santa and represented himself as being a sub-licensee for the merchandising of Baywatch products. He wanted to contract with CHILL to distribute these products. After Santa entered into an agreement with Gentile, but prior to marketing any Baywatch products, she learned that Gentile was in no way associated with Baywatch. She immediately contacted her investors and took necessary precautions to terminate any and all business with Mr. Gentile.

Eventually, the Trademark Association ruled in Santa’s favor and Fina Oil and Chemical Company was supposed to settle with her for any damages she incurred. This never happened.

On or about August 1998, Santa was approached by an FBI agent who claimed they were investigating Mr. Gentile and his illicit activities. According to them, Gentile had prior convictions and appeared to be a con man. Santa fully cooperated with the FBI and was relieved that they were pursuing this man who had fraudulently represented himself.

For reasons that Santa is still unclear on, she became the target of the investigation and was indicted on November 9, 1999. Prior to trial, her mother was diagnosed with terminal ovarian cancer and given 8-12 weeks to live. Santa was the primary caretaker and extremely close to her mother. She was devastated and could no longer focus on anything other than the well being of her mother. Several days prior to my trial, Mr. Bailey provided an affidavit to the Court that Santa was unable to focus on her defense and asked for a continuance. The Court denied the motion on the basis that two continuances had been granted to the attorney who had suffered a heart attack since Santa’s indictment.

To make matters worse, her trial counsel, Mr. Bailey became ill on the eve of her trial date and could no longer represent her. He was replaced by Robert Graham from the Jenner and Block law firm. New counsel was uninformed and had no time to educate himself or prepare for Santa’s defense.

Constantine Trela, an attorney who represented Santa for previous business purposes provided an affidavit stating that her attorney never properly interviewed or utilized him at her trial. Robert Camp also supplied an affidavit asserting same. At no time did her trial attorney present any evidence or exhibits to establish that FINO was a legitimate company, although she had plenty of exhibits to do so, all of which can be provided to any interested party.

Why Santa Chiappetta is requesting clemency

I am a 47 year old, middle-aged woman who has always had a strong work ethic since I was 13. I have maintained a good relationship with my community and most of my business associates, who have remained in contact with me throughout my incarceration.

My mother meant the world to me, so even when my own life was spiraling out of control due to the indictment, nothing was more important than caring for my mother in her final days. It was my responsibility to ease her suffering and pamper her. At that stage, I simply didn’t care nor could I comprehend the jeopardy and gravity of the charges against me.

There was no evil intent involved in any of the charges or conduct alleged against me. My greatest mistake was believing that Mr. Gentile was a legitimate businessman. I still don’t know why the FBI diverted their attention from him and targeted me, but I’ve read that this happens in cases where the target turns out to be a working informant for another agency, and therefore is “untouchable.” Moreover, the sentence I received is far outside the scope that most receive for a similar crime. I am a non-violent first time offender.

I have already served over 6 years and have a clear record of conduct throughout my incarceration. I have participated in numerous activities, programs and rehabilitation courses but most importantly, I enjoy working as the clerk for the chaplain of religious services and I have volunteered my time for numerous activities at the church. I have received a Diploma in Ministry and teach yoga to the inmates every day. I have enclosed two progress reports written by Philip Chapman, the Department Head of Religious Services at my Institution that speak highly of my performance.

My objective is to return home and re-enter society with the same energy and commitment that I have embraced throughout my life. I have worked with several charity organizations in the past and would like to continue that work when I get out. In the event I receive clemency, I have a strong support group awaiting my reentry into society.