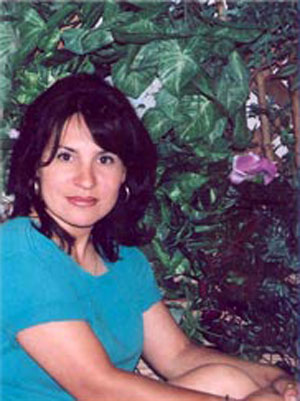 Maria Lourdes Aragon was abandoned at birth by her 15-year-old mother. Her father died when she was a baby, so her grandparents raised her, but she carried the scars of rejection. Her mother remarried and had other children but never accepted Maria. Maria was never a problem child, was a good student and was in the California Scholarship Foundation. At 14, Maria was traumatized when her uncle raped her.

Maria claims she looked for love in a father figure and thought she’d found stability with a man who was 22 years her senior. They moved to Colorado, rented an apartment and he worked as a mechanic. Confirmation of his commitment to her was the fact that he bought a car and some property and put it in her name. When his brother was caught transporting drugs, he made a “deal” and revealed the location of some buried drugs on the property that was in Maria’s name. Charged with possession of methamphetamine and aiding and abetting, Maria received a 20-year sentence.

I have tried to make the best of my present circumstance, but there is only so much one can do to turn a negative into a positive. My prison experience has been an alchemy of adversity. I am enrolled in college courses, which will give me an ABS in accounting. I have programmed and taken every conceivable course to prepare me for life outside of prison, yet it seems like I will never get to apply my skills and desires to rebuild the life I have lost to incarceration. There is something very tragic about never being able to realize your dreams and goals, when your heart is so full of desire to simply want that chance. It hurts to think that my life is so meaningless and that I am so powerless to change my fate. I cannot see what purpose would be served by 10 more years of incarceration. ELEVEN YEARS has seemed like several lifetimes.

I also believe that I can contribute a great deal to society by being a positive influence upon young people who might stray, as I did. When I was in school, I experimented with drugs, although I never sold drugs. I understand and can identify “high-risk children” who have been abandoned by one or both parents. It takes someone who’s been there to get kids to listen. Kids don’t think that adults can understand what they are going through, unless you speak from experience, which I can. I look forward to the day when I can serve the community in a positive way, rather than being a drain on the taxpayer.