Amy Povah, who leads the CAN-DO Foundation, says she confirmed with the policy advocate who is serving as a conduit that Paige’s letter was sent to the White House on Wednesday. The advocate did not respond to requests for independent confirmation.

A running back who played for several NFL teams is publicly requesting that President Trump consider a clemency request for his nephew, stepping forward to seek Trump’s help after the president battled the NFL in particular over protests during the national anthem.

Trump said Friday that he hadn’t heard from any athletes, a week after he invited them to submit names of prisoners treated unjustly by the legal system. Apparently unknown to Trump, former NFL player Tony Paige sent a letter last week requesting clemency for his nephew Marcus Paige, who is serving a 25-year sentence for second-degree murder.

Paige, a former player for the Miami Dolphins, New York Jets, and Detroit Lions, works as an NFL agent based in Maryland, and said he felt obligated to write the letter. 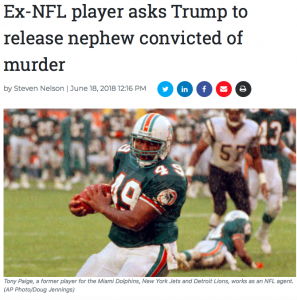 But, Povah added, “we have made a few exceptions, either where the conspiracy law caused someone to receive an excessive sentence due to violence attributed to a co-conspirator, or as in Marcus’s case where there is strong reason to believe the person is innocent.”

Marcus Paige is scheduled to be released from prison in January 2024, with credit for time served and good behavior. His mother said that even though his term is expiring soon, it’s not too late to correct what she views as an injustice, even if her son already served nearly two decades.  Read the entire story…