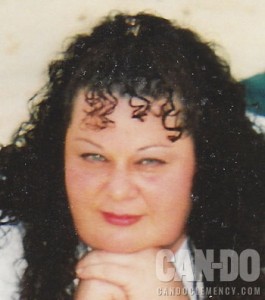 Karan was in the K9 program that trains bomb detection dogs for Auburn University. She works at Unicor in the Automated Data Processing (ADP) department formatting patents for the U.S. Patent and Trademark Office. She has held this same position at Unicor for 8 years and also worked a lot of overtime from 7:45 a.m. – 8:45 p.m.

Soon after high-school Karan opened a movie rental company and married her high school sweetheart the year she graduated. In 1993, she got pregnant and as soon as the father heard the news he left and never provided a penny in child support, nor has he ever seen his daughter.  Karan worked at a Veterinary clinic then became a therapeutic masseuse and home schooled her daughter.  In 2000 she met Billy and they started dating. He thought she should lose some weight and introduced her to Meth.  Having struggled her whole life with weight, Karan was happy with the results, until she became addicted.

In time, Billy asked Karan to purchase items which she willing did, and he would cook in a shed on his property even tho he was on probation which never seemed to be an issue, possibly because he was from a wealthy family.  Over time, Karan moved out, but they remained friends.  Karan was welcome to come and stay in a guest bedroom because Billy had another girlfriend.  Unfortunately, Karan was in the guest bedroom the day Billy’s house was raided and she was arrested.  Billy convinced Karan to not cooperate so he could get a “better deal” even tho he was far more culpable, had priors and was caught with a hidden closet of guns. Karan does not blame Billy because she realizes she is responsible for her actions, including not cooperating.  Karan has taken the drug program and paid her entire fine to the court of $6,726 by working at the prison. Karan has a job and a place to live in the event she is released.

My daughter is a wonderfully talented artist and we plan on writing and illustrating children’s books when I get home.

My co-practicing is the only one that testified against me. My judge and United States Attorney has retired.

I help rescue dogs from the dog pound here at the prison camp.

I worked for unicor for 10 years as an editor for the patent and trademark office. I have paid all fines and restitution. Fine was 1000.00 Restitution was 6700.00

I am trusted by the warden and staff members to drive inmates to the doctor.

Classes I have taken include: Business Ed and Vocational in Cosmetology and a 40 hour drug program.

I draw my inspiration from God and my Mother. My mother is very sick from Lupus and has been horribly sick for many years. She had pushed herself all these years to keep going so she could raise my daughter. My daughter was 7 years old when I came to prison she is now a beautiful 20 year old woman in college. She has to take classes from home because my mother needs constant care now. My only prayer is to go home and be with and take care of my mother before she dies and so that my daughter can have have her life back. I have not seen my mother or daughter since Aug 8, 2002. I call them once daily and have managed to stay close to them by phone.

Lonesome breeze calls my name
No one knows who I am
A stranger in this place
Numb, outdone and alone
Please can I go home