Josie’s long journey of suffering finally come to an end.  She was told by her case manager that her sentence had been commuted by President Obama.

Josephine was #3 on CAN-DO’s Top 25 Women Who Deserve Clemency.   CAN-DO Founder Amy Povah served time with Josephine and never stopped advocating for her freedom.  Amy referenced Josie in an Op Ed that was published in Fusion as one of several women she hoped would get clemency from President Obama.  Jason Hernandez recently wrote an Op Ed, also published in Fusion, that spotlights Josie – and other Latinas – seeking clemency.  Jason asks President Obama for more clemencies for Latinas at the White House in this video in November, 2015. 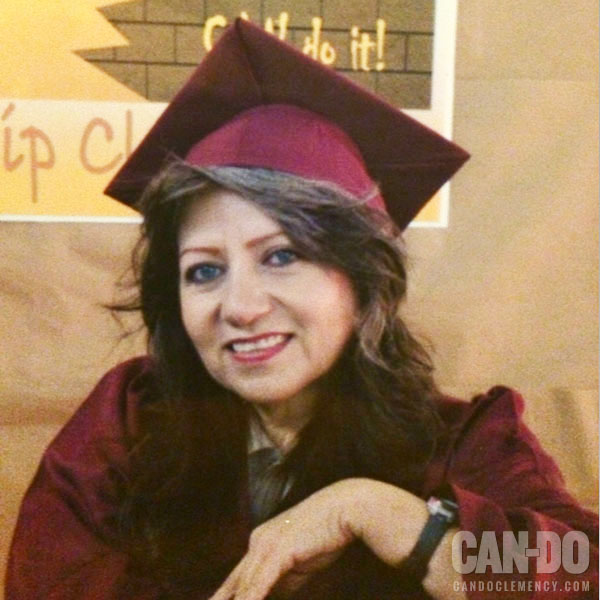 Josephine (Josie) was a teacher’s aide who married her high school sweetheart and had three children.  She never used drugs, but she agreed to do a favor for a family member.  Josephine’s brother asked Josie to give an envelope of money to someone who was going to drive cocaine from California to DC.   She readily admits that she involved herself when agreed to participate, but she never dreamed that her involvement would result in a LIFE sentence.   The person she gave the money to was involved in a drug deal with Josie’s brother who’d agreed to drive an RV from California to Washington DC.  The person driving the RV was pulled over, arrested and agreed to “cooperate.” Josie, who had given him her business card and asked him to call her at certain check points, was ensnared by the conspiracy law that holds one person responsible for the actions of all co-conspirators.  Because Josie went to trial, she received enhancements for a leadership role, and other enhancements that have since been ruled unconstitutional  according to United States v. Booker, 543 U.S. 220 (2005);  a United States Supreme Court decision concerning criminal sentencing. The Court ruled that the Sixth Amendment right to jury trial requires that, other than a prior conviction, only facts admitted by a defendant or proved beyond a reasonable doubt to a jury may be used to calculate a sentence exceeding the prescribed statutory maximum sentence, whether the defendant has pleaded guilty or been convicted at trial. The maximum sentence a judge may impose is a sentence based upon the facts admitted by the defendant or proved to a jury beyond a reasonable doubt.

Josie never admitted to, nor did the government prove to the jury that Josie was a leader/organizer and indeed, she was actually following the orders of her brother, who asked her to get involved.  Josie is not trying to deny that she was wrong.  She has expressed deep remorse and knows she never should have gotten involved in any drug deal or wrongdoing.  But a life sentence for a first offender who was a productive and law abiding citizen is excessive by any standard.

Those who testified against Josie, who were far more culpable, are now free and received compensation for their cooperation.

Josie has lost both her parents during her incarceration.  She saw her mother once in the last 23 years and regrets not being at her mother’s side during her final years.

Josie had three young children when she went to prison and they are all now grown with families of their own.

She has missed out on endless memories that can never be retrieved, but yearns to reunite with her family and salvage the years she’s missed as a grandmother.

Living in a small cell with different women all these years has taught me the value of a human being and their struggles. I have lived with drug addicted women, alcoholics, prostitutes, murderers, abused, sexually, physically, mentally, and outcast from society.  Prison became a home for some who were homeless and had no reason to continue, and from each personal story, I have learned to understand their reasoning and with the love of God have been able to be there for them to help them and never to judge them. My selfish person has been destroyed, and now I can without a doubt understand the value of a human being regardless of their problems. This experience has taught me the love of God for all human beings, and for this broken world – a revelation acquired through the pain of incarceration, which has been my greatest accomplishment.

The changes I have experienced in this place, have changed my relationship with Jesus Christ as my guide and Helper because if it was not for His help I never would have been able to do this time and be right here, right now, to tell about it.

I enjoy working with Chaplain Ashworth at the Institution’s Chapel and I currently direct services when the volunteers fail to show up.  I have taken endless programs while incarcerated but it is discouraging to acquire new talents and never have an opportunity to put some of those skills to use in a productive way, outside, in what we call, “the free world.”  The cap and gown I’m wearing in the photo was taken the day I graduated from a 5400 hour training program for the Dept. of Labor.  I’ve worked at Unicor for so many years, I’ve lost count and hope that I will have an opportunity to prove to my family and others that I can be a productive member of society, even at this late stage in my life. Most of all, I want to make up for all the times my children did not get to spend with me by being the best grandmother in the world.  I hope and pray to be given that extremely rare chance.

When my mom was put into custody I was 11. It was very difficult for me. It felt like my whole world got turned upside down. It was very hard growing up without my mom, not just for me but for my brothers also. There are so many things that my mom has missed while she has been in prison. I know it has been just as hard for her as it has been for us. Because of my mom’s prayers and faith in The Lord we had the strength to over come many obstacles. I am now 35yrs old and I miss my mom more and more everyday. No matter how many years have gone by I need her now as much as I did back then. We will be here to take care of her and help her get back on her feet. We will do anything to help our mom transition to life in society. My mom is an amazing woman. She is a very caring, understanding and a compassionate woman. Even though she has not been here physically I know that I could talk to her about everything. She is not just my mom she is my best friend. I can’t wait to have her home with us