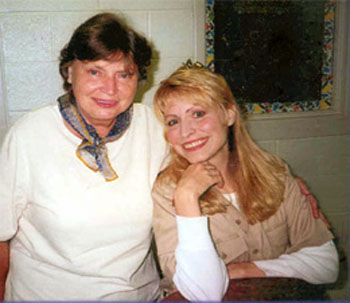 Diana Webb is a non-violent first time offender, sentenced to 12.5 years in federal prison for conspiracy to manufacture methamphetamine. No drugs were ever produced and Diana was sentenced solely on the statements of three co-defendants who had priors and were looking at extremely long sentences. All three co-defendants are free today.

In November of 1994, just before Thanksgiving, Diana was introduced to Glen Monteer by a mutual friend and tenant of a rental home that Monteer owned. Diana was a hard-working, aspiring young lawyer, working at a law firm in Missouri. At first blush, Monteer appeared to be a young professional that owned numerous rental properties and explained that he was looking for someone to invest in a rehab home. He lived on the premises and was refurbishing the potential rehab house. Monteer convinced Diana to co-sign on a loan for $20,000 that was backed by a Credit Union. For the next two months, Diana traveled overseas to visit family for Christmas and to sightsee.

In late February, Monteer explained that he had run out of money but still needed window replacements for the rehab. Cold weather from a fierce winter made the place uninhabitable and Monteer prevailed upon Diana to allow him to stay at her place while she was at work. It wasn,t long before he started taking liberties, eating her food, having strangers over and leaving a mess. He also had bouts of depression. Diana tried to lift him up, but it was hopeless. When Monteer displayed feelings for Diana, she became fed up and asked him to leave. That,s when he became manic and abusive. Never having dealt with anyone of this nature, Diana found herself unequipped to properly deal with the situation. What Diana did not know is that Glen Monteer was a drug user, a drug dealer, and violent.

The financial obligation on the $20,000 “note interfered with Diana,s ability to completely remove Monteer from her life. Concern about her credit rating and responsibility she hoped Monteer would complete his financial obligation; hence, a period of limited interaction occurred between the two for several months, during which Monteer displayed erratic behavior and stalked Diana. On July 10, 1995 Glen waited outside of Diana,s home and attacked her when she returned late that evening, dragging her into the house, beating her and destroying her place with a baseball bat. Ernie Pollock, a bail bondsman substantiated Diana,s abuse by providing his observations in a letter.

Photos document Diana,s bruised face and broken finger. Diana was treated at Lee,s Summit Hospital. During the brutal attack, it became obvious that Monteer was high on alcohol and/or drugs. Diana tried to calm Monteer, asking what he,d taken. As is common with addicts, Monteer,s fits vacillated from a violent rage, to that of a babbling child, talking incoherently. He admitted that he was addicted to methamphetamine and needed help. He also swore that if Diana ever “turned him in he would have to kill her. He conveyed that he “had to do this so she would take him seriously. A police report was filed of the incident.

Fearing that charges might be forthcoming for physically abusing Diana, Monteer stayed away. Diana,s life resumed back to that of a young professional lawyer and she wrongly assumed that the Monteer nightmare was behind her. About a year later, Diana was approached by detectives who wanted to question her about Glen Monteer who was under investigation for dealing methamphetamine. Initially, Diana volunteered that Monteer had physically abused her. Diana explained that she had only known Monteer a short time and did not have any details pertaining to his drug dealings. The detective became hostile toward Diana and insinuated that she was “covering for Monteer and he suspected that she knew more than she claimed. On August 22, 1996, to Diana,s dismay, she was listed in an indictment as a co-defendant with Glen Monteer and two others for conspiracy to manufacture methamphetamine.

Diana hired a lawyer and depositions were taken from her three co-defendants who each exculpated Diana in sworn statements. Looking at 10 years to Life, the guilty drug dealers cut a deal. In order to get the “fruits of their plea agreement they had to incriminate Diana in the event she went to trial. Diana was determined to proceed to trial until the detective started making threats to involve her mother and/or make life “very difficult. Moreover, Diana,s attorney convinced her that it wasn’t worth the price she would pay if convicted. In the eleventh hour, Diana succumbed to pressure and cut a deal with the prosecutor but was unwilling to agree to acts that were outrageously false. To get any deal, Diana had to claim some form of culpability, so she admitted to moving a box for Glen Monteer during the time he had temporarily stayed at her place. Although Diana had made it clear that she did not know the contents of the boxes, or that drugs were involved, she had to state that she knowingly moved a box containing chemicals and/or meth that belonged to Glen Monteer. That admission would relieve the judge of having to impose a mandatory sentence of 10 to LIFE if convicted. Diana struggles with her decision every day, questioning whether she should have gone to trial, regardless of terrible odds she faced.

Although Monteer had engaged in prior criminal activities, including counterfeiting, that was reduced to a lesser charge; rape and violence, convictions were not pursued in exchange for his cooperation in the instant offense and the government asked for leniency after he cooperated. He received a four-year sentence. Diana was horrified to learn that he had molested a child and no charges were brought against him because he was a government informant.

Facing 293 months, Judge Sachs granted a departure for duress and coercion based on the government,s own expert, Dr. Shaddock, who expressed his willingness to testify on behalf of Diana based on an “egregious case of injustice. Due to the documented abuse Monteer inflicted upon Diana and her “guilty plea, she received what was called a “lucky break from the judge who sentenced her to 12.5 years. Her sentence was longer than all three of Diana,s co-defendants combined, and was nearly three times longer than Steve Anderson’s who was the “kingpin of the case.

Moreover, Diana lost her home to the forfeiture laws. She lost her job and career as an attorney. Diana has paid dearly and deserves clemency.