For Gleneisha Hayter, (Danielle’s daughter) Carl Jr. (Danielle’s son) Adrian Bernard, (Danielle’s sister) and Barbara (Danielle’s mom) and all her friends, family, advocates and loved ones, the nightmare is OVER!  Danielle and her family are overjoyed to finally receive the news she has been waiting to hear for so long!  Thank you President Obama for commuting Danielle’s sentence – she will see her mother Barbara who has battling numerous medical complications, but holding on for this reunion!

Women, who served time with Danielle at FCI Dublin, congregate in Santa Monica at the Cheesecake Factory to celebrate Danielle’s epic news!

Danielle had moved to #2 on Top 25 Women When her Clemency was Granted. 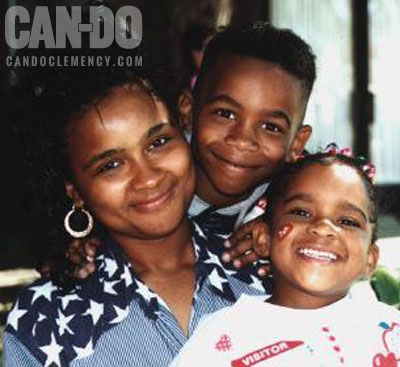 I will never forget the day I awoke and the DEA had kicked my door in at the home I lived in for over 26 years. I had never experienced such a traumatic and embarrassing moment. It was as devastating as I later discovered Hurricane Katrina to be 13 years later.

Danielle was the ninth and youngest child in a two-parent family of hard working individuals.  Her father, Emanuel Bernard was a cement finisher and president of the union he belonged to.  Her mother, Barbara, worked at night for a bakery for 41 years until Hurricane Katrina which displaced her and the bakery.  Barbara was one of 7 siblings and unlike Barbara, her sister, (aka Annie) took another route and became a petty drug dealer.

At 17, Danielle became pregnant by Carl, who was murdered when the baby was six months old.  Emanuel wanted her to abort the child and although Danielle was ashamed that she had disappointed her family, she was determined to keep the baby and vowed to take good care of her child. Just before Carl died, Danielle had caught the eye of Glenn Metz, who told Danielle that he would some day marry a woman like her – he respected the fact that she was never in the clubs and was joined at the hip to her son, Carl Jr.  After Carl Sr. died, Danielle became depressed and Glenn was there to console her.  He promised to take care of Danielle and Carl Jr.  He was 30 and Danielle was 18.

As time went by, Annie became involved with Glenn and his business.  Initially, Glenn did not involve Danielle in the drug business and was very controlling.  He didn’t like her going to her mother’s house for more than an hour so Danielle made it a priority to be a good “house wife,” cooking and caring for Carl Jr. and Glenn.  After Danielle had a child with Glenn, they got married.  It wasn’t long before Glenn became abusive.  He didn’t like Danielle to have an opinion and would strike her if she disagreed with, or upset him.

Glenn made Danielle feel as if she was getting a free ride because he paid all the bills and she didn’t work, although he’d never let her get a job.  Danielle had some cosmetology schooling, so she would cut hair, in house, because he didn’t like her leaving home, but that was the extent of her skills and/or source of income, other than Glenn.

Nature of the Case:

Glenn made Danielle feel subservient and beholding because he paid the bills.  After one abusive episode, to overcome the image that she did not contribute to the budget, she promised Glenn that she would help out any way he wished. He didn’t say anything at the time, but later asked her to ride with her Aunt Annie to Houston.   Danielle did this two times, which ensnared her in the conspiracy.  Also, at his request, Danielle collected some money from Western Union.

Danielle never had an account in her name or a social security number.  She was completely dependent on Glenn.  In 1990 they moved to Las Vegas, which removed her from having access to her family.  One day, they traveled to Los Angeles to see Danielle’s sister, Adriane. While there, Glenn called Danielle into the bathroom and backhanded her, causing her nose to gush with blood, because she had said, “so be it,” to Glenn.  He told her to not come out until there was no trace of blood.  Adriane was so busy playing with the kids that she didn’t notice anything wrong, until she saw Danielle, but Danielle just claimed to not feel well.

While returning to Las Vegas, Danielle planned her escape. When Glenn left for the casino, Danielle left a note in the closet and took the kids to Pizza Hut. After pizza, they went to a hotel and stayed the night.  The next day, before boarding a flight to New Orleans, Danielle called Glenn to tell him where she’d left the car and that the keys were under the mat and that she was leaving him.

In New Orleans, Barbara was happy to see her daughter.  Glenn called constantly, begging her to come home, but she assured him it was over.  Two months later, Danielle was indicted.

Details of the Case:

Danielle was cast into a gang of co-conspirators, most of whom she’d never met and was charged with 4 counts.

Throughout the entire “PSR” (pre-sentence report) Danielle is never linked to any violence or guns.  The only count that mentions acts of violence is Count 1 and it was vacated from Danielle’s sentence, but she did not benefit because she was held accountable for all acts committed by her co-defendants in 3 more Counts.  When Count 1 was vacated, she was never brought back to court to contest the prejudicial impact Count 1 originally caused – based on the jury hearing about the violent acts committed by co-defendants.  Vacating Count 1 left Danielle with TWO LIFE SENTENCES that she was never able to re-address – especially the prejudice suffered by being indicted with a group of co-defendants, some of who committed murder. Nor did she get the benefit of several changes in the law, including relevant conduct.

The key witness against Danielle was her Aunt Annie, who had much to gain by cooperating.  Unlike Danielle, Annie already had prior convictions for drug dealing. The feds entrapped Annie in a separate case and offered her a plea if she would testify against Glenn and Danielle in this case.  Because of Annie’s testimony, Danielle was branded an “organizer.” Although Danielle rode with Annie on two occasions to Houston in a vehicle that contained money – and one time, they brought drugs back, Annie was doing this long before Danielle rode with her, so she was not being organized or directed by Danielle.  At best, Danielle was a companion so Annie didn’t have to make the drive alone.

Barbara Bernard retained a lawyer that Danielle hired, but later learned he had never tried a criminal case – and did not know federal law.  He only visited her one time in jail and that was the day before the trial.  He told Danielle that Annie was going to be the key witness against her.

As an aside, the PSR casts doubt on Danielle’s assertion that she had no bank account or viable assets.  According to the DEA, money was seized from Barbara Bernard, Danielle and Glennisha Metz’s accounts – alluding that these were drug proceeds that Danielle was hiding.  Barbara contested the seizure and eventually won, because the money was verifiable proceeds from her bakery earnings and she had opened joint accounts for Danielle and Glennisha to save for their future. This, however, was not established until after Danielle’s conviction.