CAN-DO received a phone call from Rudy Valdez, Cindy’s brother that his sister received clemency this morning(11/22/2016) – before the list was released.  We are elated because we have been communicating with Rudy and Cindy for many years now – and this is the happy ending to a documentary he has been working on for so long!!! 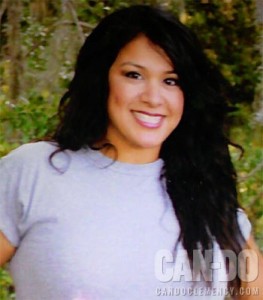 DOB: 01/01/1973
Age: 42 yrs old
Children: 3 young daughters
Race: Hispanic
Charge: Conspiracy to Distribute Cocaine
Sentenced: 2008
Sentence: 15 years
Served: 8 years
Release Date: 03/24/2021
Priors: FIRST TIME OFFENDER
Prison Conduct: Exemplary conduct – not a single incident report
Accomplishments: Forklift certified: Works at UNICOR; *See list below
Institution: Lexington Camp
Clemency Petition: Filed a petition with the Pardon Office in 2013
Cynthia presides over CRB at her prison, also known as Citizen Relations Board.  CBR received items like yarn and fabric that are donated to the prison, which inmates make into various items such as hats, scarves, mittens blankets. The women’s prison makes all items by hand or on a sewing machine. Last year the prison made over 18,000 items and this year we should be reaching over 25,000 items. We donate to 19 different organizations such as, MASH, VA Hospital, Domestic Violence shelters, Fayette County Elementary School, One Parent Scholar
Additional Completed Courses Include:

Cynthia was indicted based on her relationship with someone who was a major drug dealer we’ll refer to as A.H.  He was shot and killed at his home and Cynthia willingly provided information to the authorities, who did not seek additional information from her regarding the case.   Because Cynthia was never asked to assist with the investigation, she moved on with her life, thinking it was all behind her, got married and had three children.  Five and a half years later she was indicted for conspiracy charges related to A.H.’s drug dealing.

With three small children to care for and love, Cynthia felt she had no choice but to go to court, to save her marriage and keep the family together. Due to the conspiracy statute and mandatory minimums, Cynthia was found guilty and received a harsh sentence.  The trial, incarceration and being a single dad took its toll on Adam who divorced Cynthia in 2012.  Cindy realizes she should have taken stronger steps to completely disassociate herself.  She is remorseful, believes she deserved to be punished, but also thinks her 15 year sentence was too harsh for a first offense. If sentenced today, she would receive less time.

Cindy’s loving family has been patiently making preparations for her arrival and will make sure her re-entry is a smooth and successful transition in the event she is chosen as one of the fortunate candidates, worthy of clemency.

Cindy’s goal upon release is to seek gainful employment as she seeks joint custody of her three daughters. Her central priority is to put her family back together and become an integral part of her daughter’s lives.

While I would like to say that my time in prison has served to make me a better person, I can’t because that would be dishonest. I was once a contributing member of society, with a growing family. I am now divorced from my husband and separated from my daughters who need me desperately. At least a 1000 different times my daughters have cried out to me too “just come home.” When I left they were just 4, 2 and 6 weeks old! At first I thought my daughters would get used to me being gone and that time would eventually make it easier for them but that has not been the case.  Every phone call there is longing and tears; wounds that get reopened every time they come to visit, only to leave with out me, again.

The visits are the hardest, which are rare because they live so far away. I get to see them, hold them, tickle and laugh with them, but I hate to have to announce the time. “Only 10 minutes left girls,”  and I see the panic flash across their faces, knowing that soon they will have to leave and go back to a life without their mom. Yes, I want to be free for many reasons but mostly it’s for them; my precious babies, who are now 10,8 and 6 years old! Their whole lives have been spent without me, I have missed so much that can never be retrieved. I just want a chance to love and hold them so tight before they are grown. I want them to know there is no clock and that I don’t have to let go and say good-bye – not ever.

I am thankful for my wonderful family, especially my brother, Rudy, who has gone to great expense to bring my girls to see me, since he lives in New York City. I don’t know what I would do without him. He’s been so supportive and understands the pain I’ve experienced.

Over the past 6 years, I have managed to stay busy. That is what we do, we stay busy, like most women here I do everything I can to fill the void. I cram as many books, work outs, programs that I can just so I don’t have to stop and think about where I am and who I am hurting by being gone. I’m sure right now I should be saying that prison is making me a better person and I’m learning a lot but that would not be the truth because I’ve either taken what is available or what few “classes of substance” they do offer I cannot attend because I have too much time. All the open slots go to the prisoners who have the least amount of time, so they can benefit before they are released. So, people come in with two years and take the slot while I remain on a waiting list. I feel like I’m buried alive. I see people come and go and I’m still here. Don’t get me wrong, there are a lot of things I would like to do, learn and accomplish, which I do by reading everything I can get my hands on – the only problem is I can’t do much to achieve my goals but I promise that I’m doing everything I can, that is available to me, and more.

I’m glad that the Clemency Project 2014 is offering hope to so many, but again, the criteria is that prisoners must have served 10 years or more! I pray that my petition, filed with the Pardon Office, will be well-received and, by the grace of God, our prayers will be answered which so I can tuck my daughters into bed at night and while they are still young enough for me to be the mother I desperately want to be.