What an honor to meet Michael in person on the 420 Fishing trip that in Florida sponsored by Stacey Theis, Robert Platshorn, Freedom Grow Forever, CAN-DO, Life for Pot,  and many others.  We will soon be adding an entire page of photos for the 420 event that brought together many of our amazing cannabis prisoners that we have been fighting to liberate for many years.

Michael Pelletier was Serving Life for Pot – He is NOW FREE and HOME! 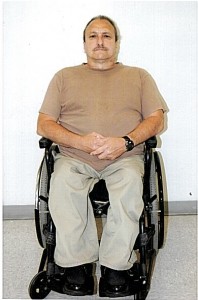 Michael Pelletier, #11109-036
Date of birth: 1/31/56
Age: 65
Offense:  Conspiracy to Import and Distribute Marijuana
Sentence: Life without parole
Incarcerated Since: 2006
Served: 14 years
Raised: Madawaska, Maine
Tried: Banghor Maine
Will live:  Florida.
Priors:  two minor pot related priors
Family: No children.  Elderly father passed away, 8 siblings.
Heath Issues: Michael has been a paraplegic since he lost the use of his legs in a farming accident at age 11.  He has had no physical therapy since being incarcerated and has many blood clots in his left leg.
Clemency status: Pending since 2015 Clemency Case #C174947
Institution: FCI Terre Haute P.O. Box 33, Terre Haute, IN 47808

Why commutation:  The mere fact that Michael is a paraplegic should  be grounds for mercy in the form of clemency or a compassionate release.  He poses no threat to society and he has paid dearly for his participation and involvement in importing and selling marijuana. If Michael does not receive clemency, he will endure a very painful existence due to the lack of any physical therapy, or medical care necessary for someone with Michael’s handicap.

Post Release Plans: Michael will live with his brother, Dave. He has 8 siblings that will all provide for Michael to assure his transition is a smooth one and to ensure his needs are met.

When Michael was 11 years old, he hitched a ride on the back of a tractor that his brother, Gerry, was driving while hoeing potatoes. When the tractor took a sharp turn, Michael fell. Not realizing that his brother had fallen off, Gerry drove over him, crushed Michael’s stomach, snapped 1 inch of his spinal cord and paralyzed him from the waist down. Tragically, Michael’s life would never be the same.

When Pelletier was 14 years old, he began to experiment with marijuana, as many young people do, only in Michael’s case, he discovered the therapeutic benefits of this plant long before there was any legitimate, scientific research, or passage of any state, “medical marijuana” propositions that have since become common, nationwide. Pelletier learned that cannabis lifted his depression, and numbed the pain associated with his disability. The cannabis seemed to provide relief, not only for depression, but for a myriad of ancillary issues associated with his paralysis and incapacitation, such as bladder spasms and his spinal injury at T-7 with transection of the cord. The revelations that Pelletier experienced are not meant to minimize the severity of his crime, rather provide insight into his state of mind that led him to engage in a risky endeavor that would cost him far more suffering than the temporary relief he enjoyed associated with his recreational use of marijuana, that later grew to importation and distribution of this Schedule 1 narcotic.

Michael’s original desire to secure cannabis for himself led to the obvious conclusion that he could share the balance of his procured cannabis with friends, who also wanted to obtain marijuana, and in doing so, pay for his own stash.  He gradually progressed from a “dime bag” to larger quantities of pot, to satisfy his desire to smoke, get money back with a small profit and provide a familiar and trustworthy source of marijuana to his friends and eventually, his associates.

At 50, Michael Pelletier was indicted for for a nonviolent marijuana conspiracy offense and currently sits in federal prison serving a sentence of life without parole.  In the instant case, Michael Pelletier readily admits that he arranged to have marijuana imported for his use and to sell to others. However, the testimony of cooperating co-defendants is suspect, such as Adam Halford who admitted at Pelletier’s trial he had exaggerated the amount of marijuana being imported to the grand jury.  Even the Bangor Daily News reported, “Drug smuggler says he lied to grand jury.”  Pelletier says the testimony was absurd, “we have a witness who admits he never learned to swim claiming he swam across the St. John River with amounts of cannabis he could not have even lifted.” Inflating the amount of drugs in a conspiracy case is not uncommon and Michael’s case appears to fall into this category.

While Michael’s recollection of the facts presented at trial differ from the testimony of his co-conspirators who had entered into plea bargains for a reduced sentence, he is willing to admit that he did engage in the marijuana trade, but on a much smaller scale than the jury was told and which they found him guilty for.

Madawaska, Maine is just below the Canadian border and the family typically traveled into Canada to visit his mother’s extended family, that lived there, access restaurants, shopping and other modes of entertainment. It wasn’t long before Michael discovered that the marijuana he obtained in Canada was far superior to any he had sampled in the U.S. This triggered the impetus for Pelletier to smuggle small quantities of “BC bud” from Canada into the U.S. to share with his friends, which led to his first marijuana trafficking case in 1992. From there, Michael’s encounters with the law became a slippery slope, because he no longer respected a law that interfered with his access to a substance that afforded him some degree of relief. Moreover, Pelletier’s genetics did not mix well with alcohol. Alcohol made Pelletier hostile and defiant, which was not his normal disposition, according to everyone who knew him, and he did not like the way he acted when he drank, which caused Michael to favor cannabis all the more as his preferred means to self-medicate and as his favorite recreational choice to reduce stress.
According to Michael, “My father always instilled in me the strong conviction that I could do anything that I set my mind to and gave me the tools necessary to overcome adversity and lead a productive and positive life. I was never allowed to feel sorry for myself or to think ‘why me.’” Over the years, Michael’s father (and extended family) provided him with funds to open a restaurant, snack bar, ceramic shop and beauty salon. Except for the beauty salon – those endeavors failed to prosper and were viewed as another setback to Michael’s goal to become independent. Although Michael was successful at his watch and jewelry repair, which he continued to do from 1977 until his arrest for the instant case, he had the same burning desire that many red-blooded Americans have strived for – the American dream to be successful.  Unfortunately, Pelletier decided that his key to success was one that would land him in prison.

Michael Pelletier has exemplary conduct and has never received a single incident report throughout the duration of his incarceration. He is currently thriving as an artist working with oil paints on canvas, perfecting his craft over the years to the extent he has developed an ever growing fan base that is spreading through social media. To date, Pelletier has over fifteen pieces of art and numerous advocates are in possession of additional paintings. This small income stream helps Michael pay against his extremely large fine and allows him to purchase new art materials so he can continue to paint and afford him some items on commissary.

Michael has taken advantage of many programs offered by the Bureau of Prisons and is currently learning how to play the guitar. Moreover, Michael volunteered to teach an art class to other inmates who have an interest in learning how to draw and paint in a variety of mediums, including water colors and oil based paints. Michael calls his class, “Brush Hour” and earns $4.80 from the Bureau of Prisons per month, meaning it is officially recognized by the administrative staff at Terre Haute. Michael hopes to develop his skills as an artist throughout the duration of his confinement and if he is fortunate enough to receive clemency, after his release. Both teaching and engaging in these artistic projects keeps Michael’s mind busy and distracts him from his handicap that restricts him from engaging in most activities, plus the realization that he is facing a life sentence, without parole.
In addition to completing numerous courses while serving time for his prior conviction, such as Anger Management and completing his GED (General Education Development) Michael has completed the following courses in Terre Haute where he is currently incarcerated.

Pelletier says he does not seek sympathy or special treatment, but also does not feel the punishment fits his crime. He says, “Having a life sentence is a feeling of dying every day. It’s worse than death that happens one time. It’s a living death.”

We asked Michael Pelletier a series of questions to help everyone get to know him better, Here’s what he said:

What meal or food do you crave most that you will want to eat when you get out?
I miss my grill BIG TIME so t-bone steak, baby back ribs, and of course, as I am from Maine, Maine lobster!

Favorite song(s) and/or musical artist(s)?
Waiting on a Friend by the Rolling Stones, Forever Young by Rod Stewart, Independence Day by Martina McBride, and Shooting Star by Bad Company.

What is your favorite color?
Cerulean Blue.

If you could walk out tomorrow and go anywhere – where would it be and why?
To Madawaska, Maine to see my 89 year old father before he passes away!

If you could travel to any country – where would it be and why?
To the Netherlands because it is a country that has common sense about cannabis!

What do you most want people to understand about being incarcerated that you don’t think they understand?
When a paraplegic or someone confined to a wheelchair is incarcerated, we are confined to our cells.  We can’t work in the kitchen, on the outside crew, in maintenance, etc.  We can’t play basketball, baseball, handball, or any sport.  Our time is twice as hard!  Having a life sentence is a feeling of dying every day. It’s worse than death that happens one time. It’s a living death.