On February 19, 1998 law enforcement entered Andrea’s home with a search warrant obtained and based upon the word of an informant who was facing an 85-year prison sentence. The “snitch” was guilty of being a major distributor of methamphetamine and to reduce his sentence he told the police who his “customers” were. The cops tore her home apart in front of her three small children and put Andrea in handcuffs when she did not tell them where drugs were stashed. In fact, Andrea could not provide the police with that information because there were no drugs present, which was confirmed after the search was concluded.

Andrea admits that she and her husband were users and she had become addicted to methamphetamine. After 97 days in the country jail, Andrea was allowed to go to a 28-day in-patient drug treatment and released on bond. While on bond for five months, Andrea did a lot of speaking in schools and in front of Wyoming state officials as a substance abuser. She received numerous letters of support from prominent citizens in her community applauding her recovery efforts and requesting that she receive treatment instead of incarceration.

Andrea’s lawyer encouraged her to plead guilty and beg for mercy. She had never been in trouble before and thought that the judge would have some discretion in her sentence. Her attorney never explained the mandatory sentencing laws to her. Andrea took the stand and told Judge Downes that she and her husband were addicts but that they had never purchased the amounts alleged by the government’s snitch. The snitch testified at Andrea’s sentencing, but his testimony contradicted what he previously told officials. Regardless, another nine years were taken from his sentence for his “cooperation,” which by now had whittled down from 85 to 15-years.

The government would want everyone to believe this drug-dealing defendant was the scum of the earth worthy of a prison term equivalent to a life sentence, except for the fact that he was willing to help them convict the very people he sold drugs to. Under those terms, his word becomes the gospel truth and based upon his testimony, Andrea’s judge was mandated to sentence her to TEN YEARS and her four children, ages 13, 9, 4 and 2 were split up and sent to separate homes.

Why Andrea Asch is requesting clemency

Reuniting with my children is my greatest priority. Only two of them are together out of the four. My family has experienced such pain since I’ve been incarcerated and I want to help them heal.

I’ve worked hard to improve myself and am proud of the accomplishments I’ve achieved during my incarceration. I came into prison with only a GED. I had very low self-esteem, and no goals or dreams for a future. Today, I am a couple of classes away from receiving an Associates Degree in Applied Science with a focus on Chemical Dependency Counseling. All my college courses were done through correspondence and mostly on scholarships. I was the first federal inmate to receive a scholarship through Rio Salado College in Phoenix, Arizona. My efforts and good grades enabled other inmates to receive subsequent scholarships from the college. The spring of 2004, I was inducted into the International Honorary Society of Phi Theta Kappa and also made the National Dean’s list, which isn’t easy under normal circumstances, much less behind bars.

I chaired a self-help group of NA for over three years and was a mentor to the women who struggled. All of these experiences 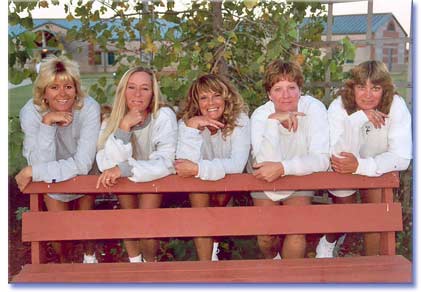 have helped me better understand myself. I very much want to help others, especially mothers, to overcome addiction and to never have to experience the pain that my children and I have been through.

In addition to my studies, I also worked full time and earned an apprenticeship in quality control and assurance through Unicor Prison Industries. I have been the lead welder and acquired other beneficial job skills. I am proud to say that I have taken a horrible situation and turned it into a positive. I am ready to be a mother that my children will always be proud of and a productive citizen in society.