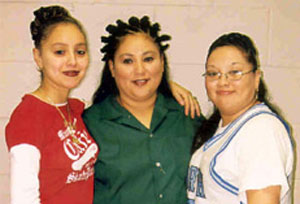 Yolanda Reyes is serving her 19-year, 7 month sentence. In addition, she was fined $40,000 for her participation with a man who sold cocaine. When he first came into her life, Yolanda was a lettuce picker in the fields with two baby girls and another on the way. At first, he seemed to make life easier. In the long haul, her life was shattered when she was arrested for “conspiracy.” Yolanda contends that she knew what he was doing but that she turned a blind eye. Yolanda was convicted for conspiracy based on the word of witnesses who traded testimony for reduced sentences, or no time at all. By their own admission, some of these witnesses were much more guilty of drug dealing that the worst accusation made against Yolanda.

Why Yolanda Reyes is requesting clemency

I can’t describe the degree of suffering I witness on a daily basis. I’m surrounded by women, who like myself, made some bad choices and have been severely punished for those choices, but the punishment and suffering spreads much further than within the limitations and confines of the prison walls that separate us from our children and families. I have already served more time than most people serve for rape, child molestation, and even murder. While I accept the fact that people must be punished for breaking laws, I don’t understand the obvious injustices related to the drug war. Why do kingpins often get less time, and even go free, if they merely “cooperate” and testify against a mule or “associate” that was working for the kingpin? Most of the women I serve time with received more time than their male co-defendants who were major participants. Maybe it’s because men will do what it takes to save their skin, but the prosecutors aren’t interested in the least guilty. They want someone to go to prison and that’s usually the little minnows and least informed, which often equates to the women.

While incarcerated, my mother passed away and now my dad is in very bad health. In February 2002, he suffered a second heart attack and his health has been rapidly failing. My sister takes care of him, but she also has health problems and is stressed under the weight of caring for my children in addition to her own. I fear my father may pass while I am locked up. The guilt I feel for not being able to take care of him is indescribable.

My children now labor in the fields as migrant workers to help with the cost of their clothing. Two of my children are now adults, but they face difficult problems. My daughter, Eloisa is 26 and recently lost both her fiancï¿½ and mother-in-law. She also has the burden of raising two children that were left behind by her fiancï¿½; hence she had to drop out of college in an effort to support them. I fear this is going to have long-lasting negative consequences, as she has been working so hard to achieve a college degree so she can move up in life and make something of herself. My two other children, Marisela and Rigoberto are going to college, but they have had to overcome many obstacles to afford this luxury. I pray daily for an opportunity to reunite with my family to assist in every way possible and help earn income. I realize there is no “free ride” or shortcuts to support oneself. For many minorities, there is only one way to survive and that is hard, manual labor, which I am not afraid of and wish I had never been tempted from to begin with. Everyone in my family is a hard worker. I’ve heard President Bush say that America is the land of a second chance. I realize that I cannot be forgiven, but I am begging for leniency and a second chance. Please, Mr. President, give me a second chance and I will make you so proud that you did.