CAN-DO performed a survey of halfway house closures that resulted, in part, to the information shared in this article written by Victoria Law for Truth-out.  Read the entire story, that references the cases of CAN-DO members Alicia Siller, Carolyn Bell, Lori Kavitz, Crystal Matter and Cedric Lamont Dean, plus quotes by CAN-DO founder, Amy Povah. 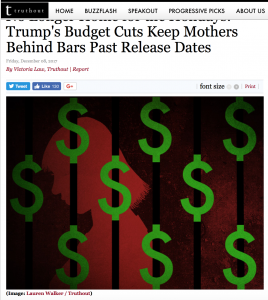 “It’s never this chaotic,” said CAN-DO founder and president Amy Povah, who was granted clemency by President Clinton. Under normal circumstances, she told Truthout, the Bureau of Prisons issues a memo to its prisons informing case managers of changes in policy. The case managers, in turn, relay this to the people incarcerated at that particular prison. But in many prisons, this chain of information didn’t seem to occur, foiling families’ plans for holiday reunions.

“They Just Slapped Me in the Face … Again” said Lori Kavitz, who had her date pushed back twice!

It’s not only clemency recipients who are hit by these budget cuts. The grassroots organization CAN-DO (Clemency for All Nonviolent Drug Offenders) has heard from at least 15 people incarcerated across the country whose release dates were postponed; they also confirmed that many of the men and women in these prisons were in similar situations. In other words, the number of people affected most likely reaches into the hundreds.