CAN-DO was asked to obtain quotes from several of our clemency candidates.  Fortunately, we were able to get quotes from Michael Pelletier, Chad Marks and David Barren for the following article by Steven Nelson for Washington Examiner. 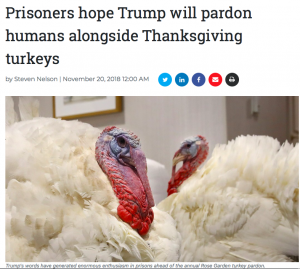 When President Trump “pardons” a pair of Thanksgiving turkeys on Tuesday, prisoners will be watching and hoping that Trump breaks with tradition and frees human beings alongside lucky birds.

This year, optimism is fueled by signs that the White House and Justice Department are processing clemency requests, as Trump denounces perceived unfairness in criminal sentencing and vows to release more inmates.

Last week, Trump endorsed legislation that would reduce some drug-crime penalties, after saying in October that “a lot of people” are jailed for “no reason” and that he was “actively looking” for inmates to release.

Trump’s words have generated enormous enthusiasm in prisons ahead of the annual Rose Garden turkey pardon.

“I fall into the category of people who are taking up precious bed space in an overcrowded prison ‘for no good reason,'” said Michael Pelletier, who is serving life without parole for importing marijuana from Canada into Maine — two jurisdictions that since legalized recreational pot.

“I am a paraplegic, serving a life sentence for pot. I’m not a threat to society,” Pelletier told the Washington Examiner in an email from prison. “I’d love to vacate this cell and wheel out of here and into the arms of a large and loving family who are tired of getting their hopes up, only to be disappointed.”

Like much of his presidency, Trump’s clemency review process has been unconventional. Former White House counsel Don McGahn invited an outside policy advocate to assemble lists of worthy inmates, which were hand-delivered in June to McGahn and Jared Kushner, Trump’s son-in-law and adviser.

A pivotal moment for outside advocates came in June, when Trump commuted the prison sentence of drug convict Alice Johnson, long advocated for by the CAN-DO Foundation before her cause attracted the attention of celebrity Kim Kardashian West, who visited the Oval Office to argue for her release.

Kardashian West returned to the Oval Office in September to discuss a commutation for Chris Young, a 30-year-old arrested at 22 and sentenced to life for drug crimes. During the visit, Trump on his own brought up Matthew Charles, who returned to jail this year after a court found his drug sentence was reduced in error.

It’s been four months since Trump gave anyone clemency, in what is widely believed to be a pause for the midterm elections, when Trump crisscrossed the nation on behalf of Republican candidates. Now, though, aspirants are excited about benefiting from Trump’s enthusiasm.

“Each year we watch a turkey pardoned and given a second chance to roam about freely. If my fiance David Barren was given the opportunity to be pardoned this Thanksgiving and reintegrate into society as a free man, it would be life-altering for us both,” said Anrica Caldwell, vice president of the CAN-DO Foundation.

Barren, whose drug-dealing life sentence was shortened by President Barack Obama to end in 2034, said that “clemency would be an opportunity to sit at the Thanksgiving table with my family,” including his parents, who are in their 80s. “I would like to be given one more opportunity to thank them for being there during those moments that I’ve needed them the most,” he said.

Chad Marks, who is 16 years into a 40-year sentence for drug conspiracy, said, “I pray President Trump will find me worthy this year by pardoning both me and other men and women who need relief. Carrying on the tradition of pardoning a turkey is OK, but hopeful I can also walk free with the turkey.”