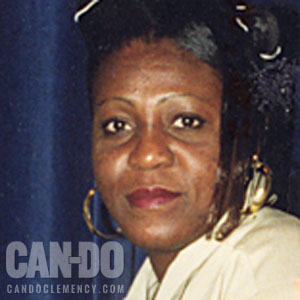 According to Teresa, she was in an abusive relationship with a very jealous man who made good on his promises to beat her if she didn’t perform the tasks he demanded, such as transporting drugs from Texas to Oklahoma and picking up proceeds of his illicit activity. Her impetus was to avoid his wrath but she now realizes she should have taken whatever extreme circumstances necessary to escape this abusive and destructive relationship that has essentially cost her her life. She was 26 years old and pregnant when she was arrested with half a pound of cocaine and $38,500 of her boyfriend’s illicit proceeds.

Teresa realizes that her involvement with the drug trade, no matter the situation, must have consequences and therefore she fully understands that she deserved to be punished for her participation. But Teresa does not deserve to die in prison for actions committed over twenty years ago. Teresa has displayed good conduct throughout her incarceration and deserves a second chance.

I have done the best I could with the time given me to gain the tools that will help me to live a better life than the one I left behind! I hated the life I had but felt trapped in it. That was, Oh, so long ago! Feels like another lifetime and a different person!

I was in a community outreach program here called Share; we spoke with at-risk women and girls in the community. I spoke to hundreds of girls and women about the mistakes I made and what they can do differently so they don’t end up taking the path that I was on that led me to prison. Our program got awards for volunteer programs on the community and state level and even a “Point of Light” presidential nod once! I know what it’s like to be young and in trouble and feel you have no where to go and/or no one you can trust. I want to help kids when I get out. I was a very successful speaker in the program and plan on finding a way to do that kind of work when I finally regain my freedom, which I now realize is the most precious gift that most people take for granted.

I have 4 children, and 2 grandchildren with one on the way. My baby girl, who is now 23 years old, has autism and needs care around the clock. I have almost spent half my life in prison and I feel I’ve used those years productively. I have earned a Business certificate with the Tallahassee Community College. I am now teaching the leather class at the institution. In my spare time I take a lot of classes. I am taking a business education and just finished a class in ceramics. I like to read and just started to exercise.

I have worked in UNICOR for 17 years with different products in the Tallahassee factory. I have learned a lot working for UNICOR in a clerical position and believe I can use that skill as a productive citizen in society. I hope and pray that I will receive a favorable recommendation for clemency and that President Obama will have mercy on me and permit me to go home. If I am realized, I have family that will assist me with re-entry and getting my life in order.

My previous case manager wrote a letter of recommendation for my clemency petition.