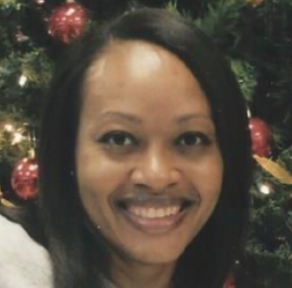 We are pleased that Tanesha was set free on May 1st 2019 thanks to the First Step Act.   Congratulations to Tanesha and all her family.
Tanesha was introduce by President Trump at the 2020 President Summit at the historically black Benedict College in Columbia, South Carolina.  You can watch her speech here

According to Tanesha:
In 2002 I was arrested and charged with Conspiracy to sell 50 grams of crack and 5 kilos or more of cocaine. At that time I had just turned 28 and I am now 42 years old.  After trial I was sentenced to LIFE in prison starting February 2004. I filed my appeal and won along with 16 other co-defendants. I was resentenced July 2008 to 280 months (23 years). At my time of sentencing the Judge expressed that she was bound by the guidelines. She explained that she knew I was not the same person standing in front of her and could clearly see I was utilizing my time to better myself, educate myself, and grow as a person.  She wished me luck and said she would see me again.

Eventually in 2012 I did go back in front of her but the Government was not willing to go against the previous lawyer I had, nor the prosecutor. Even though I did not gain any relief based on new laws passing that were not retroactive I never waivered in bettering myself, so when my chance came, I would be armed with the necessary knowledge to excel in society.

Why I deserve clemency:

Since being incarcerated I’ve earned my GED in 2004. I have attended Tallahassee Community College for Business Management. I have also taken Drug Education class because it was available even without being a user. I took part in helping others, I have completed over 100 ACE classes and have taken every class offered through education and psychology. I am currently studying to become a certified personal trainer and I have also graduated with my Cosmetology License through the State of Florida. I am presently working with the biggest program provided here, in Bryan Texas, which is the obesity program, Jumpstart. It was introduced Bureau-wide through Warden Marnie Boyle.

I am asking for second chance from President Trump so I can finally be home with my 2 children, who are now adults. When I left home they were 8 and 10 years old. Now my daughter is 24 and my son is 22! I have missed so many years of their lives and even though I cannot make up the time, I can build from the time we still have and help guide them to be modest citizens in society. My daughter is expecting her first child. It would mean everything to me to be there from the beginning of the beautiful life of my future grandchild. Now is the time I need to be there more than ever. Not only for the support my children need, but a chance to share my hard-earned wisdom with my child so I can guide her along the way.

My son is 22 years old and has gone through a life changing experience that has been the hardest for me. I often find myself saying the “what-ifs” all the time. If things were different or if I was there, but I realize that God does not make any mistakes. And without him I honestly know I would not have made it through all this. He is the center of my life. Apart from him I am able to do nothing.

Growing up, I was an only child for 14 years. Eventually becoming the oldest of 2 brothers and 1 sister. Life was not easy and I became a product of my environment. I started selling drugs to provide for my family and my kids and lost sight of what was truly important.   I wanted to give my kids nice things and not be as poor as I was. Never in a million years did I think the punishment would be so grave. I have never been in major trouble before but with one possession charge in state court 10 years prior, in which I paid a $300 fine with no jail time had me looking at 20 years to life mandatory in the federal system.   If I was re-sentenced today I would have get 15 years and 6 months, which I have done that and more with good time. Based on being sentenced under the harsh sentencing guideline that has been changed, I did not qualify for any reductions because it was not made retroactive to help the very ones like myself that are stuck under the harsh mandatory minimum guidelines. I have learned from my mistakes and paid the price for the last 14 years not only for myself but my 2 children have suffered, greatly.

Through it all I have become a complete person and deserve a second chance to show I can be a law-abiding citizen and contribute to society and to provide for myself as well as my family. I have obtained what I need to be successful, my passion is fitness and I aspire to help others with fighting obesity and other health issues that so largely exist. I also will utilize my cosmetology license to work in a salon as well. I have several job offers upon my release, with family support to help with my transition.

At the institution I am currently at has provided a letters written on my behalf to include the Warden, Case Manager and Detail Supervisor to support the character I posses and that I am greatly involved in programming. The previous institutions I was at also have provided me with character letters because they all support my release and have truly seen the changes and what an asset I will be to the community.