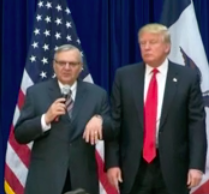 On August 25, President Trump granted former Arizona Sheriff, Joe Arpaio a full pardon.  Strange since he has often said that illegal immigrants should never be permitted to leap frog over all the people waiting in line who have applied for, and are using the proper path to citizenship.  Hmm!  All the more reason why Arpaio’s full pardon raises a lot of controversy and indignation.  What about all the people who have pending clemency and pardon applications at the Office of the Pardon Attorney who are waiting patiently and are so deserving?

That’s why we’d like President Trump to see this video of the faces of women who received clemency and the ones still seeking justice through clemency.

Our video is paired with this change.org petition seeking the reversal of AG Jeff Sessions’ directive to escalate the drug war.  He also wants to increase civil asset forfeitures, encouraging federal and local authorities to seize more property than they currently do, including seizures without charging anyone with a crime.   Sessions has directed prosecutors to charge and seek the most severe sentences for minor, non violent drug offenses, even though he erroneously claims there is no such thing as a low level drug offender.  We know better.

The CAN-DO Foundation advocated for over 100 clemency applicants that fit into President Obama’s clemency initiative criteria.  Approximately 44 women and 30 men that were profiled on our website were given mercy in the form of clemency.  But, many who were extremely worthy were passed over in the mad rush leading up to Obama’s last day in office.

Please sign our petition seeking a rational approach to the drug war that makes sense, in keeping with a smart philosophy, such as, “Let the time fit the crime.”