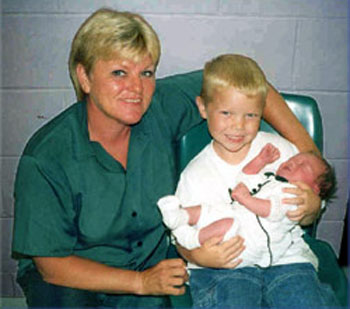 Ruth Carter is serving her 5th year of a 15 year 8 month sentence for Methamphetamine Conspiracy. In 1994, Ruth was working for the prosecutor’s office in Kansas City, Missouri. She loved her job and had outstanding work performance. Unbeknownst to Ruth, the government was building a case against her boss for drug charges. Ruth claims that government agents tried to intimidate all of the employees in an effort to gain information. Because she couldn’t provide information and was unwilling to lie, she was indicted for drug conspiracy.

Evidence of additional corruption in Ruth’s case is the fact that an officer in the property room was fired for theft and an investigating officer was forced to resign for inappropriate behavior. They, however, did not go to prison.

On January 12, 2000, one day after Ruth was committed to a federal prison, her son-in-law committed suicide. Thirty-seven days later, her 21-year-old daughter was killed by a drunk driver. Ruth’s oldest daughter, who was 23 at the time, was disabled when her leg was crushed in the same accident. The drunk driver served a mere 8 months in prison.

The media has reported on Ruth’s case on numerous occasions, the most recent of which was by her local Channel 5 news station.