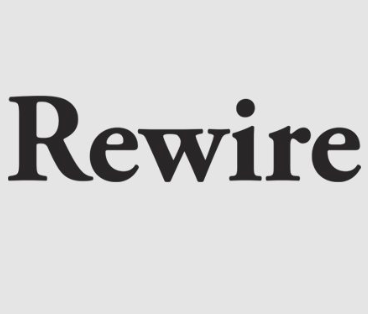 Special thanks to Victoria Law and REWIRE, for this in depth article:  “Women do not choose to have a period,” said Amy Povah, who spent nine years in a federal prison and is now the founder and director of the CAN-DO Foundation, in a phone interview. “If we are going to lock up women, then we must provide them with feminine hygiene products. This is not a luxury!” 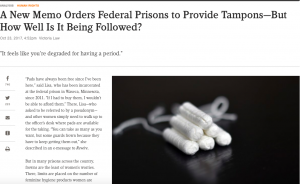 … There, limits are placed on the number of feminine hygiene products women are given; if they need more, they must buy them at the commissary—or prison store—often at prices that are exorbitant for those making pennies-per-hour at prison jobs.

Approximately two weeks after senators introduced the Dignity for Incarcerated Women Act, the Bureau of Prisons (BOP) grabbed headlines with its own announcement—starting on August 1, 2017, federal prisons must provide feminine hygiene items. The memo’s orders last only one year.

Both the memo and the act, if passed, affect only those in federal prisons, including private ones with federal contracts—or nearly 13,000 of the 111,500 women in prisons across the United States. (This figure does not include the 99,100 women in local jails, the unknown number of trans women held in male facilities, or those held in immigration detention.) But providing even 13,000 women with feminine hygiene products is a start.

Tynice, who has spent the past 12 years at the federal prison in Bryan, Texas—often choosing to forgo buying shampoo to afford pads—said in an e-message the memo is “a blessing.”

“I have been incarcerated for the past 12 years and this is the first time that I don’t have to set money aside to get $10 maxi pads, $8 tampons or $5 toilet paper on a [Bureau of Prisons] income,” Tynice, who asked that her last name not be used, wrote in a message to Rewire. The monthly wages at that prison range from $5.45 to $60. “It is saving me money and I don’t have to worry about, ‘Will I get in trouble for stocking up on feminine products throughout the month.?’” In many prisons, if a person is caught with more toilet paper or tampons than are allowed, they can be issued a disciplinary ticket. Getting a disciplinary ticket comes with consequences ranging from losing commissary (or ability to shop at the prison’s store), phone, or e-message access, to even losing in-person visits for 15 to 30 days.

According to the Bureau of Prisons’ Information, Policy, and Public Affairs Division, the orders in the memo are being followed. In an email to Rewire, an unnamed official wrote, “The Bureau of Prisons provides feminine products free of charge to inmates. However, the type of products provided [varies] by institution. The issuance of the recent operations memorandum ensures that female inmates will be able to choose from a larger variety of feminine hygiene products, including two sizes of tampons, two sizes of pads, and panty liners. They are generally placed in a common area and women may have as many item as they need. When they have a preference for a specific brand, they may purchase these items from the inmate commissary. The cost of feminine hygiene products sold in the commissary varies based on the product brand.”

In separate emails to Rewire, the executive assistant for Federal Correctional Institution (FCI) in Danbury and the public information officer at the federal prison in Bryan stated that tampons, sanitary pads, and toilet paper are provided free of charge and without limit.

But inside many other federal prisons, women aren’t seeing these promises fulfilled. Families for Justice as Healing and CAN-DO Foundation, advocacy organizations formed and led by formerly incarcerated women, surveyed women in federal prisons to determine whether those prisons were following the August memo. Women from 14 of the 28 federal prisons that house women responded. According to those replies—which can vary from other sources based on individual experience—despite promises made on paper, many prisons are still not providing tampons, panty liners, or pads for free as needed.

Read the entire story at Rewire…