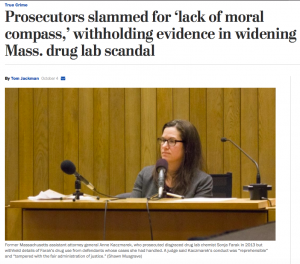 Twice in recent years, chemists used by the state of Massachusetts to test drugs in criminal cases committed massive misconduct in their testing, affecting tens of thousands of cases. And twice, prosecutors in Massachusetts failed to act promptly to notify most defendants of the problem.

Instead, the prosecutors have taken years to seek justice for the defendants affected by the bad drug testing in both episodes, causing some people to wrongly spend years in prison.

In the first case, after five years, the Massachusetts supreme court eventually forced state prosecutors to compile a list of affected defendants and ultimately dismiss 98.5 percent of the cases involved, with more than 21,000 drug convictions erased. In the second case, discovered in 2013 but still unfolding, a judge concluded recently that two prosecutors committed “intentional, repeated, prolonged and deceptive withholding of evidence from the defendants” and that “their misconduct evinces a depth of deceptiveness that constitutes a fraud upon the court.”