CONGRATULATIONS TO MARY – who walked out of prison on June 23rd 2015, after serving all of a very harsh 30-year sentence.  Mary was given a bus ticket and arrived in Cedar Rapids Iowa where she is now staying in a half-way house.  “I’ve talked to her three times, now,” said Amy Povah, founder of CAN-DO. Once while she was on the road and twice since she’s been at the half-way house.  They say she can’t have a cell phone yet, but other inmates at other half-way houses have been allowed to have cell phones right away.  It’s frustrating, but she’s on her way to a free life that will present challenges and many rewards. 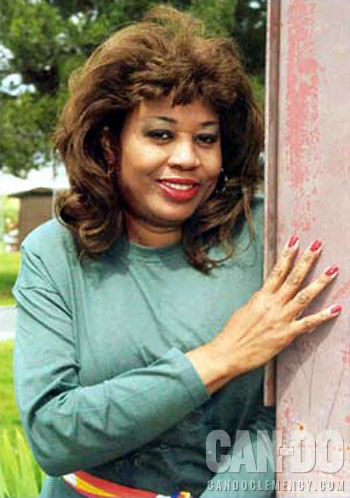 Age: 69
DOB: 05/05/1945
Race: African American
Children: 1 son, 2 grandchildren
Charge: Conspiracy to distribute cocaine base.
Priors: 2 priors – 1 prior that consisted of 2 charges was split to create the illusion that Mary had 3 priors and hence put her in a Career Criminal category that added another 20 years to her sentence.
Sentence: 30 years
Sentenced: 1990
Served: 24 years
Release date: 03/16/2016
Prison Conduct: No incidents – perfect conduct
Accomplishments: 500 RDAP Drug Program; Small Business Development; Worked at UNICOR (prison industries); 60 hours of Career Works Training – 2009, and much more
Clemency: Filled out the survey for Clemency Project 2014
Compassionate Release: Her Camp Case Manager Approved her for Compassionate Release and DC has not made a decision to date
Institution: Carswell, Texas Camp

• Received a high school diploma from Sacred Heart Catholic High in Camden, Miss. in 1964.
• Attended Jackson State University, in Mississippi for one year in 1966 and received a 3.17 GPA.
• Attended one semester at Columbia College at FCI Dublin.

• Mary developed stage II Diabetes in 1999.
• She has a painful lump in her breast – no biopsy to date.
• Acute arthritis.
• High blood pressure.
• Heart problems.

Why a commutation should be granted:

In 1988, David Ritcherson traveled from Los Angeles to Des Moines, Iowa at the request of “Ricco,” who had previously been arrested and later recruited David – sending him on a mission to sell drugs for Ricco.  There is a suspicion that Ricco may have been cooperating with the feds in a plea agreement to lessen his sentence and therefore was under pressure to make a new case for the feds.  Reason being, Ricco was never charged in this case, even though he was the instigator.

At some point, after David arrived in Des Moines, he met Mary and they became romantically involved. He moved in with Mary and often drove her car. Unbeknownst to Mary nor David, he was already under surveillance. On June 1, 1988, David was pulled over while driving Mary’s automobile. His sister Lisa was in the car with him and she possessed one small rock of crack cocaine. They also found $350 tucked in David’s sock and seized the money and rock, yet neither were charged or arrested.

As reported in the PSI (Pre-sentence investigation), “On August 2, 1988, a confidential informant (C.I.) indicated that David Ritcherson would be transporting cocaine base from L.A. to De Moines.”  It is odd that the feds did not ask their C.I. to make an arranged buy, nor did they use an undercover narc to approach the suspects  – David and T. Watts in order to bust them in the act of selling drugs, which is normal procedure and would have provided the prosecution with hard, reliable evidence. Instead, after David returned from L.A. the feds issued a search warrant on Mary’s home assuming the drugs would be there. Approximately 9-10 law enforcement people burst into her residence with drug dogs and raiding the place. No drugs of any kind were found!

Because there were no drugs, the feds seized four new motor scooters on the assumption that the scooters must have been purchased with drug proceeds. While the officers were inventorying items they considering worthy of seizure, a pager went off.  An officer answered it and determined the call was made by Watts from an apartment leased to C. Cofer.  A warrant was quickly issued that same day and when the feds entered Cofer’s residence, T. Watts was present.  The feds found $4,405 dollars in cash and some cocaine residue.

There is no evidence linking Mary to this conspiracy.  She was indicted with David Ritcherson, T. Watts and C. Cofer. Cofer, only person/residence where drugs were found, was acquitted.

Admittedly, Mary was involved in a heroin case with two other people – S. Smith and D. Williams that pre-dated this case. She was charged in 1981 for ‘possession with intent to deliver heroin’ to run concurrent with ‘possession with intent to deliver morphine.’ She received a 10-year state sentence and served time for this charge.  The only evidence given at Mary’s trial against her was from two people linked to these old charges from Mary’s past, S. Smith and D. Williams, yet they had nothing to do with this case.

Even in the PSI, it summarizes that “Mary was primarily involved in the distribution of heroin” and they never link her to the conspiracy for which her co-defendants were charged.  In exchange for testimony, Smith and Williams were never charged for any wrongdoing, although they were more culpable than Mary, by their own admission/testimony.

The government split Mary’s aforementioned concurrently-ran priors; enabling them to charge her as a “career offender” and thus, artificially enhance Mary’s sentence by 20 years.  Without this tactic, Mary would have received a 10-year sentence. Mary was the least culpable of everyone charged, yet, not uncommon, received the harshest sentence. Even the most ringleaders in this case are free today. Mary is the only one who remains in prison and should be granted relief, based on ‘disparity of sentence’ and to correct an injustice.

There were no African Americans in Mary’s entire jury pool in Des Moines, Iowa. In Mary’s final appeal the 8th Circuit ruled that it is NOT a constitutional violation to exclude blacks from the jury process, despite several Supreme Court rulings to the contrary.

Mary filed a clemency petition in 2007 that is still pending.

First of all, I would like to say that I am not a saint. I have made some mistakes for which I have dearly paid. However, the 30-year sentence that I am presently serving is extremely disproportionate to the alleged crime I was convicted for and to the sentences of my two co-defendants.

On paper, one of my priors looks bad but there are special circumstances that occur in one’s life which are often outside our control. I was in an abusive relationship, which eventually called for my self-defense. In 1977, no one ever used the term “battered woman syndrome.” Nor did anyone care or take it up as a political issue. I paid for that crime in 1978 and I have been paying for it ever since, even though the charge was reduced to a misdemeanor.

I have endured some difficult times in prison, but the most painful and everlasting was the loss of my beloved father who passed away in 2001. I greatly regret that I could not be present during his final days, nor was I able to attend his funeral or be together with my relatives.

Although my family is supportive, it is a financial burden on them to come see me in prison and frankly, I don’t want them to see me like this. I have four grandchildren that I have not seen in the 14 years I have been incarcerated and two of them I have never seen at all. Mere words cannot describe the pain and loss I feel relative to my family ties. I know these are not compassionate times, but I urge you to consider my age and the fact that my health is failing. I still have productive years in which I can work and benefit both my family and society.