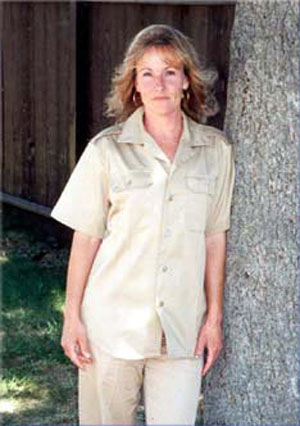 Karen Archer, currently serving her 19th year of a 24-year sentence for “Conspiracy to Distribute Methamphetamine,” was not involved in the sale of meth — she was merely present when her co-defendants were busted. By this point in her life, Karen was an addict, due to the circumstances of her childhood, and her association with the co-defendants, motorcycle gang members who have since admitted to a long history of physically abusing Karen.

Karen was picked up off the streets by one of the co-defendants when she was 14 years old. In his affidavit, he wrote:

I first met Karen Archer when she was about 15. At that time I was in my early thirties and after a few years our relationship became intimate and sexual. I accepted and indoctrinated her into my beliefs. I believed that her mother did not care for her and I told her so. I also told her that I was her family and if she needed someone she could count on me. I taught Karen that there are moral responsibilities that are more important than man made laws, such as taking care of your own business, not to snitch on people, not running to the police (and I taught Karen this). That on more than one occasion, Karen has observed me engage in acts of violence against other people, but never when I thought I was in the wrong. I told Karen that my father beat my mother and that any woman that is with me and doesn’t listen to me will get punished and I have on more than once occasion, beat Karen, although I always believed it was out of love and at that time, the right thing to do for the proper upbringing. That is retrospect, I can’t believe some of the horrors I brought on this woman. As in the time I lost control and cracked her kneecap with a steel object, or the times when we were out partying, I would slap her or treat her abusively in public, like the time I once hit her in the face and broker her tooth. That as difficult as this is for me to admit to anyone I must be honest and say that at one point in time. I became abusively jealous and motivated by a recent trend in sadomasochism, as in the time that I tied Karen in leather straps and hung her naked on a bolt from the ceiling, while threatening her with a whip. Because of my upbringing, I thought I was doing the right things and. love and fear were an equal balance and the way to get a woman’s respect was to beat her when she didn’t do as she was told and Karen knew if she disobeyed me, she would get beaten. During the course of our relationship, I introduced Karen to the recreational use of a drug called crystal methamphetamine.

In this affidavit, he goes on to explain that later he became involved with another woman and he “introduced” Karen to his son. The son also provided an affidavit, which included some of the following excerpts:

I began a relationship with Karen Archer soon after her relationship with my father ended. I was raised by my father and I believe in the ideas he taught me; a man should control his woman with threats and violence if necessary and a person should never snitch on another person. During my relationship with Karen Archer, there were many incidents in which I beat her. During the course of our relationship, at various times I hit Karen with my closed fist, a flashlight, baseball bats and a whip handle. On one occasion I threw a full soda can and struck Karen in the face, cutting her nose. I whipped her when [she] was pregnant with our child. On once occasion when Karen and I were fighting I grabbed her by the throat and choked her. On several occasions when Karen tried to leave me, I would catch her and beat her. In about 1990 I went to jail for beating Karen. During the times we lived together, to my knowledge Karen never investigated what was in the boxes in our shared bedroom and she did not know they contained meth precursors or weapons. Those were my boxes, not Karen’s. She knew that if she ever rummaged through my things I would have been very angry.

Karen has two children who were very young when she was sentenced to 24 years. Karen’s mother raised her children, but in 2001, Karen’s mother died and the children were displaced once again, in their teens. Karen filed a clemency petition in 2000 that is still pending.