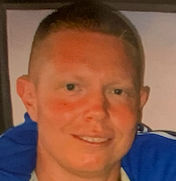 Name: Eric Scott McCauley
DOB: 10-14-1981
Race: white
Marital Status: single
Age: 39
Children: 1
Grandchildren: 0
State where you are from: MO
State indicted: MO
Will release to: Columbia MO
Trial or pled guilty: Not guilty
Charges: Conspiracy to distribute over 100 kilos of marijuana, possession with intention to distribute over 100 kilos of marijuana, distribution of marijuana and money laundering.
**Side note: Eric is actually serving time on acquitted conduct. His jury rejected the 1,000 kilos listed in the indictment that his judge later used anyway to sentence him.**
Length of Sentence:  23 years
Served: 14
Started Sentence on: 12/11/2008
Release date: 02/25/2029
Priors: First Offense
Forfeitures: None. The judge waived forfeiture due to indigent status after a forfeiture hearing.
Prison Conduct: 2 shots early in incarceration, but nothing in over 5 years. He went through many struggles as would most anyone but found a way to turn it all around and has nothing but good conduct since those 2 incidences. Eric has dropped in custody level from the medium to the low to his current satellite camp with no disciplinary record or reports.
Clemency status:  Pending, Clemency #: C288102
Health Issues: Right frontal temporal lobe seizure disorder
Supporters: CAN-DO Foundation, Freedom Grow, Mother; Ann McCauley Father; Jerry McCauley, Tim Blake, Founder of The Emerald Cup, Several friends and family
Institution: FCI Forrest City Low
Federal Correctional Institution Satellite Camp
P. O. Box 8000
Forrest City AR 72336

I was convicted as a first time non violent marijuana offender. The quantity of marijuana I am currently serving time for was rejected by a jury of my peers. My jury refused to convict of the 1,000 kilo quantity suggested in the indictment. Instead, returning conviction on the lesser included offense of 100 kilos. The sentencing judge overrode the jury finding, holding me responsible for the full 1,000 kilos previously rejected. Had I been sentenced consistent with the jury finding, I would no longer be the burden of tax payers, instead, I’d be home paying taxes myself.

Late summer 2004, William Darden came to me with a business proposal. He suggested I over pay approximately 150,000 for his 4 rental properties. With the extra money we would open a car lot in which I would become joint partner. I was entering my senior year of college. Will, 4 years my senior had already graduated from Mizzou with honors. At the time he’d been a mentor to me, someone I looked up to. Long story short, he split with the money, leaving me upside down with properties in need of lots of work. I should have let it all go, but with the vision I had created in my mind and my 1 year old son, I mistakenly thought life would be over if my credit crumbled. I made the worst decision of my life.

I started bringing in marijuana to sell through the colleges. Things grew fast and I seen the money was in the high grade. Originally I bought from a guy in Kansas City, then Massachusetts, and in the end California. The suppliers would either send it to me or I’d pay drivers to go get it. Never semi trucks or anything like that. I never got more than would fit in one sedan. I’d then sell to smaller guys and repeat the process 2 or 3 times each month. In an attempt to provide a savings vehicle for my son, I’d have a friend deposit his pay roll checks in the bank and live off my cash. It was the stupidest thing I’ve ever done. In the end I lost not only my credit, but my freedom, and my son had to grow up without his father.

If given a second chance I have lots of opportunities and an incredible support system. I would move directly in with my father, Jerry McCauley, who is successful, has no criminal history and is currently raising my 16 year old son Ethan. It would make he and Ethan’s world for me to come home. While Ethan has had positive male roll models, he has been without me since 5 years old. It would be our dream come true to see him off to prom, walk the stage at graduation in 2021 and to send him off to college.

While finishing my degree I have many job opportunities. Some of which have changed over the years, with new opportunities daily. I have the opportunity to manage the real-estate portfolio for my step sister Laura and her husband Casey. I’ve been offered salary position with Tim Blake at Emerald holdings and my sons grandmother Ruthie Morgan offered to give me her business. She is one of the largest breeders of high dollar Rag Doll kittens in the country. She is ready to retire but neither of her children are interested.

In my free time I plan to stay fit, meditate, and give back to my community by helping with Boys and Girls clubs of America and a group known as Youth in Action.