Barbara Tillis isn’t sure when she’ll get to see her son, Corvain Cooper, again.  (read the entire article here)

Every few months for the past four years, Tillis, has driven five hours with her husband, daughter and Cooper’s oldest daughter, making the trip from Rialto to the federal prison in Atwater, near Merced. They’d spend the day visiting and chatting, and guards would let each family member give Cooper exactly one hug. When the visit was over, they’d reluctantly pile into the car and drive home. 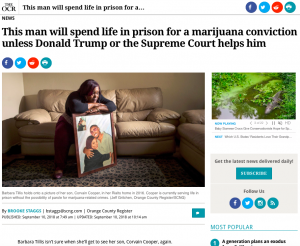 But that routine ended a month ago. Cooper was transferred to a federal prison in Louisiana, and Tillis said her family can’t afford that trip.

Amy Povah, founder of the nonprofit Clemency for All Non-Violent Drug Offenders, or CAN-DO, included Cooper on a list of prisoners she believes deserve clemency. A week ago, Martin Luther King, Jr.’s niece, Alveda King, delivered that list of roughly 100 names — including Cooper — to the White House.

King called it “outrageous” for people to be serving long sentences for marijuana. And while she said she couldn’t discuss details of how Trump is handling clemency cases, she said, “I do believe that the President is very genuine about prison reform.”

Povah said Cooper’s case highlights a number of persistent problems with the criminal justice system, from how defendants who refuse plea deals are penalized to the seemingly unequal application of drug conspiracy laws and mandatory minimum sentences.

Cooper’s case also stands out, she said, because unlike other “pot lifers” he wasn’t locked up years ago, at the height of the war on drugs. Cooper received a life sentence for a non-violent marijuana crime during President Barack Obama’s administration, just four months before Colorado and Washington became the first states to legalize the recreational use of cannabis.

“It’s absolutely heinous to think that people can now legally work in this field, and invest in it for something that someone else is serving life in prison for – or any sentence, for that matter,” Povah said.

That conflict is central to a documentary expected out in early 2019, which will feature Cooper’s story. It’s also why Cooper’s portrait and letters are included in the “Pot Lifer Museum,” opening soon inside a marijuana dispensary in Ojai. And it’s a reason cited by many of the 15,000 people who’ve so far signed a Change.org petition calling for Cooper’s release.