Charles “Duke” Tanner is an extraordinary case of an undefeated boxer from Gary, Indiana.  He’s a first offender serving a 30-year sentence, reduced from LIFE WITHOUT PAROLE.  He is on the CAN-DO Top 25 Men deserving of clemency and is one of several cases we have sent to the White House for President Trump’s consideration.  Link to full story below… 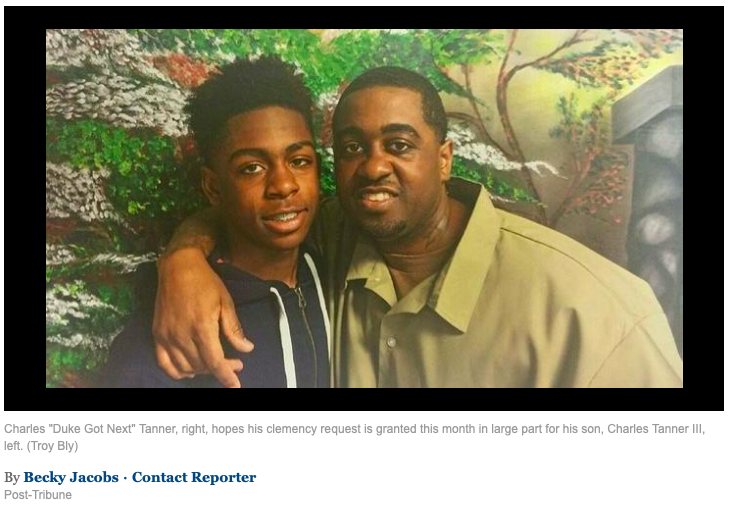 Charles “Duke Got Next” Tanner has a bunch of reasons why he’s hoping he gets clemency this month, but one of his driving forces is his son.

“What would be a greater gift than to give myself and to be in his presence physically? That’s the greatest gift I could give in his lifetime,” Tanner said.

The former Gary boxer’s clemency request is currently pending with the Department of Justice. Tanner and his supporters are hopeful his will be included in any requests President Donald J. Trump may grant during the holiday season.

This time, he’s seeking a commutation of his sentence, which could potentially lead to his release or reduction in sentence but would not clear his conviction or imply innocence, according to the DOJ.

Amy Ralston Povah, founder of CAN-DO, said she sees a chance for clemency for Tanner.

“Tanner is certainly a strong contender,” she said.

While Ralston Povah has worked with other inmates across the country in their clemency efforts, she said “it was kind of hard to ignore Charles’ case because it’s so compelling.”

CAN-DO, or Clemency for All Non-violent Drug Offenders, prioritizes cases of women who received lengthy drug sentences based on conspiracy laws, those with life or long sentences for marijuana and first-time offenders.

Ralston Povah created the nonprofit after she received her own clemency request was granted during President Bill Clinton’s administration. She served nine years of a 24-year prison sentence on conspiracy drug charges.

Ralston Povah said that Tanner “is almost a poster child for someone who deserves a second chance.”

“It’s just one that touches your heart,” she said.