BBC writes about Kim Kardashian’s trip to the White House and talked to CAN-DO Founder Amy Povah.  CAN-DO is elated that Kim Kardashian has committed herself to freeing Alice Johnson, who has been on the CAN-DO Top 25 since 2014 and was mysteriously passed over by the Obama administration.  Read the entire story here:

Excerpt:  According to her family and supporters, Johnson has been a model inmate who is active in many programmes, including work in the prison hospice. She fitted all of the criteria for former President Barack Obama’s Clemency Project 2014, but was denied just days before the end of his term.
“This is the last time I’ll put my family through the heartache of expectations,” Johnson told the BBC at the time.

Amy Povah, the founder of CAN-DO Clemency, has been advocating for Johnson’s release since 2014 and says she has helped collect signatures from 70 organisations who support the pardon, as well as a letter of support from the retired warden of Johnson’s prison.  All of that material may be submitted to President Trump.
“She’s always stood out to me as being exceptional,” says Ms Povah. “She’s not bitter or angry, she’s this ray of sunshine.” 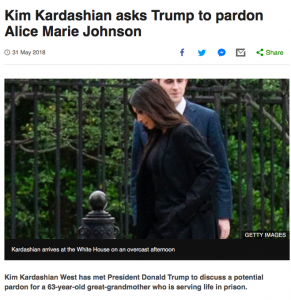 CAN-DO Foundation put BBC reporter Jessica Lussenhop in touch with Alice Johnson back in 2015 and she has stayed on top of Alice’s story ever since.  She even interviewed Alice’s two daughters, Tretessa Johnson and Katina Smith when they went to the Obama White House Clemency summit in 2016.  We hope Jessica’s next story will be about Alice’s homecoming reunion when she is finally set free and can put this nightmare behind her.