Amy Povah, founder of the CAN-DO Foundation, said that she left the White House optimistic about the chances of both legislative reform and clemency under Trump. Povah, who received clemency in 2000, said she supports the Kushner-backed bill.

“I think there’s good will and there’s interest in clemency,” she said. “Trump granted one in his first year, and that’s very rare. I think it’s just a matter of the right cases finding their way to the White House because the Justice Department has been obstructionist.” 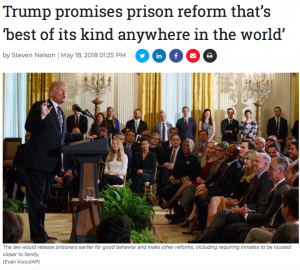 “There are women that will die in prison. Women like Alice Johnson who will die in prison if she doesn’t receive clemency. First time nonviolent offenders,” said Topeka Sam, an activist with Jones-led reform group Cut50, who was herself a federal drug inmate for three years.