The CAN-DO Foundation believes that incarcerated female firefighters should receive clemency from Governor Brown for displaying extraordinary character in the face of dire circumstances.  Rehabilitation has long been an incentive to reduce a prison sentence and we can see no better opportunity than this, to set an example by rewarding these women with their freedom in return for their bravery, hard work, and for saving the state of California millions of dollars.  If California’s budget and residents benefit from this program, then it must be a two-way street.

As reported in The Mary Sue: 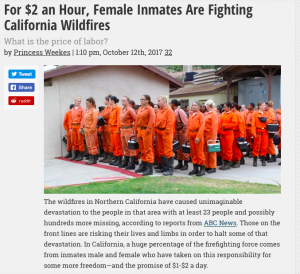 NBC News reported that roughly 3,800 inmates (13 percent of California’s firefighting force) are enrolled in the fire program, which saves taxpayers $124 million a year. In these programs, women do the same work as men, and are broken into teams of fourteen with chainsaws and other equipment to help cut cement lines that will hopefully stop the fires from spreading.

In interviews with NBC and the New York Times, many of these women talk about how the experience is, in many ways, positive for them since it offers them more freedom than a typical prison experience. To be in the program you have to be a non-violent offender with no history of sexual offenses and pass a physical exam. In return, they make $2 per day in their fire camp and $1 per hour for time on the fire line, which is better than the usual 8 cents and 95 cents an hour that California inmates make. The camps also allow women to have family visits and it is a much cleaner environment.