Johnson said it took a miracle for her case to grab the attention of the Trump administration — and that miracle came in the form of Kardashian West.  For years, Johnson believed Obama was her last hope of leaving prison alive.  Now, she’s hoping Trump will do what Obama wouldn’t. per Business Insider Read the entire story
May 30th was Alice Johnson’s birthday, the same day Kim Kardashian went to the White House to talk to President Trump about clemency for Alice.  Business Insider reached out for comments to CAN-DO President Amy Povah.

“She has expressed incredible remorse, that this was the worst thing she ever did,” Povah said of Johnson. “And we shouldn’t be defined by the worst decision that we made.”

Povah added: “She has 21 years of evidence that she deserves a second chance and she deserves mercy. Enough is enough.” 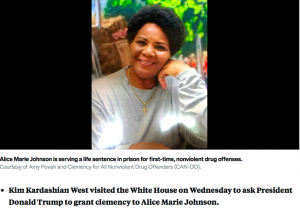