Andrea James, founder of Families for Justice as Healing (FJAH) together with many formerly incarcerated women helped spearhead the Dignity for Incarcerated Women Act of 2017. Andrea polled numerous women from the National Council of Incarcerated and Formerly Incarcerated Women and Girls, (The Council) an organization she co-founded who’s members include a long list of women working to raise awareness to the plight of our current mass incarceration crisis.  Formerly incarcerated women shared the most degrading aspects of incarceration, such as being shackled during childbirth, lack of proper medical care geared toward women, their inability to call their children because of exorbitant phone rates, and lack of feminine hygiene products, just to name a few. Those and other issues were passed on to Senator Cory Booker’s office, who, with Elizabeth Warren (D-MA) and Kamala Harris (D-CA), introduced the Dignity for Incarcerated Women Act of 2017 (The Dignity Act).This critical legislation calls for specific changes in the way women in federal custody are treated.

On August 1, 2017, the Bureau of Prisons (BOP) issued Operations Memorandum #001-2017 RE: Provision of Feminine Hygiene Products

FJAH, partnered with the CAN-DO Foundation to conduct a survey and determine whether women’s institutions were complying with the aforementioned policy statement issued on August 1, 2017.  The first survey was conducted on August 24th to see if incarcerated women had been informed of the new policy. Based on our survey, only one institution had shared the policy with the orderlies and that was FCI Waseca, Minnesota.*

A copy of the memorandum was sent to women housed in every institution so they could reference it and ask about implementation. A follow-up survey was conducted on September 14th. What follows is a report card based on responses from more than one woman, per institution, to ensure consistency. Another survey is currently being conducted to refresh the data in the interest of fairness and to follow up on institutions that claim the products have been ordered. Report card will be updated on a monthly basis. 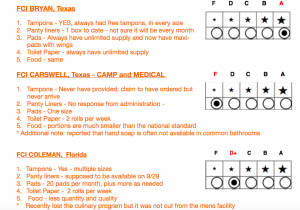 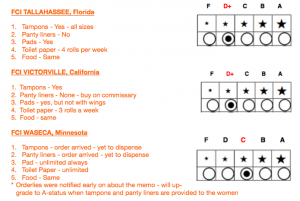