Interview about Barbara Scrivner and her daughter Alannah on Yahoo News

Nature of Offense: In 1992 Barbara had just given birth to Alannah and her husband, Richard Scrivner, was in prison. Barbara pawned her valuables and was desperate to pay rent and meet living expenses.  Richard orchestrated a drug deal from prison and told Barbara that she could make some quick money if she would merely act as a “mule.”  Valerie, the girlfriend of a drug dealer, delivered some “meth” to Barbara and Richard told her where to take it. Barbara did this for a couple of weeks until she could pay her bills and reclaim her pawned items. She never had contact with the main dealer.  After Richard was released, he

dealing but excluded Barbara from any involvement. When the group was busted, the girlfriends of the ringleaders cooperated and Valerie implicated Barbara, who was not arrested for over a year. The prosecutor offered Barbara 10 years if she would testify against everyone. Since she’d never met the leaders, she could not satisfy the prosecutor’s demands. She went to trial and was held accountable for the entire conspiracy, even thought her involvement was limited to a few weeks.

When Barbara was only seven years old, she was molested by a friend of her mother’s boyfriend. This had a psychological impact upon Barbara that led to a cycle of abusive men and drug addiction. In 1996 out of despair and wishing to end the pain inflicted upon her incarcerated soul, Barbara attempted suicide by jumping off a 40-foot building onto cement. The fall was nearly fatal and resulted in two broken legs, a broken ankle, a completely separated pelvis, ruptured bladder and broken spine. During rehab, Barbara became determined to turn her life around and make the most of what was left – she received counseling that enabled her to understand what led her to make destructive life choices.  She has completed every rehabilitative course offered, including the intensive 500-hour drug program and become a mentor for other students.  By working at Unicor in prison, Barbara was able to enroll in and pay for correspondence courses at Stratford Career Institute, graduating with honors.  She is now enrolled with Ames Bible College for Biblical Studies.  Barbara believes that she has the skills and education to create a better future for herself and Alannah and yearns for that opportunity

Sentence:  The court agreed that Barbara had minimal knowledge/participation and the judge departed 2 points from the guidelines.  Ironically, Barbara received the same 30-year sentence as her husband who was a major distributor and had prior drug felonies.  Both the judge and prosecutor have stated that Barbara received a “harsh sentence.” Judge Haggerty has even written a letter to the pardon attorney in support of Barbara’s clemency. The U.S. Attorney for the state of Oregon, Karin Immergut also wrote to the Pardon Attorney, agreeing with Judge Haggerty’s opinion.

Nature of priors: Barbara’s criminal record is closely tied to her addiction to methamphetamine. She was charged with three counts of second degree possession of a controlled substance in 1987 and 1989 as a result of her relationships with drug-dealing boyfriends. In 1989 and 1991, she stole a pair of sneakers and cigarettes while high on meth and was charged with third degree theft. In 1991, Barbara was charged with forgery after buying work clothes with a lost credit card. She pled guilty to all charges.

No one ever wishes to be sent to prison, however I am glad I came. I was finally able to break free from the past and become a different person. What is the hardest part for me to face is the fact I do not have the opportunity to use my new self in society. I am very active inside the prison helping women who really want to change and I am proud of that. I just know I can do so much more for society, my daughter and my family.

Currently in the news, a priest convicted of child molestation will receive no more than 10 years. I know from personal experience the damage done to a child who is sexually molested.

My daughter was 2 years old when I was arrested and I love her with all my heart. I am blessed she is in a loving/church going family (with my father and step-mother). We have frequent visits, correspondence and phone calls. We have a deep bond and she loves me dearly. It hurts me so much to hear her little voice ask me when I can finally come home. To hear her dreams, wishes and goals, that I am not a part of – and in reality will not be a part of as I am in prison with a harsh and lengthy sentence. To hear her ask me over and over why God doesn’t answer her prayers. To hear her confusion about God and prayers. I respond as carefully as possible that God hears all prayers . he just does things in his own way and we must always keep faith in God and continue with prayers.

Changes in me came at a high price a 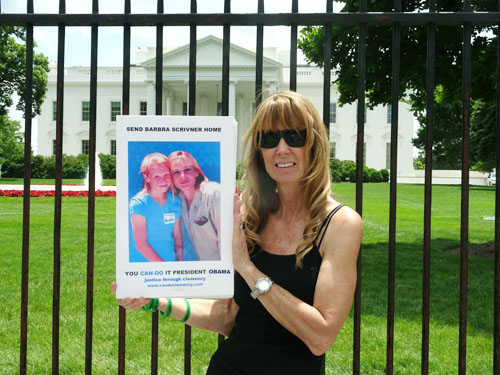 nd not overnight. After my appeal was denied I became even more depressed. I transferred to FCI Tallahassee .and reverted back to the suicidal thoughts and on Nov. 6th 1996 I jumped off a 40 ft. building onto cement. That attempt to end my life was nearly fatal. While hospitalized I did some serious soul searching on what I wanted and needed out of life and myself. I was hospitalized for four months and was told I may never walk again or walk correctly. Both legs and my left ankle were seriously broken, two places in my lower spine were broken, my pelvis was completely separated and my bladder ruptured. I had to undergo major surgeries where metal plates, rods and screws were used to repair my body. The doctors fixed me physically, now it was my turn to fix me in all other ways. I pushed myself and learned to walk again. I will always have chronic pain daily. I listened to the psychological staff and took to heart their advice about the meaning of change and bettering myself. I became free from co-dependency and learned how to change the dysfunctional thinking patterns I grew up with. I learned I had to really love myself and start changes from within. Sounded easy, but it wasn’t.

My first step was a three day KAIROS [workshop] through our chapel to help me spiritually. I completed the 12-month 500 hour drug program while doing in depth one on one counseling with psychological staff. I learned to be humble, admit failures and mistakes and grow from them. I learned life was worth living. I took a nine-month program called “New Pathways” that dealt with how to heal and grow from being a victim of sexual, emotional and physical abuse. How to not be a victim and to break free from patterns and not be destructive.

That was difficult but the one that helped me the most. I have been an active mentor for women in the program. Staff members have me deal one on one with women, serious in recovery and change. I am regarded as a success and was chosen to speak to visiting Federal Appeals Judge Tallman, who was interested in the programs and their worth.

At sentencing you asked me if I had anything to say and my response was “There is nothing in my character that would allow me to ever do anything that would merit a 30 year sentence.” That stands even truer today. My true crime was low self-esteem, an on again, off again, drug dependency, poor choices in men and the inability to break free from a dysfunctional lifestyle.

At the time this charge occurred, I had been [drug-free] for 15 months, had a new baby and was desperately trying to change a husband who was hooked on heroin. I never partook in any planning, helping or the organizing that my co-defendants did. I did not know them on any personal level. The only time I personally had any active part whatsoever with them was when my husband was incarcerated and I told him over the phone that I needed help. His way of helping me was to call [a guy] that sent [his girlfriend] to my house to give me drugs. My husband told me where to take it. I was desperate for money so for a few weeks I did as I was told. If I could do it all over again my choices in all aspects would be different.

My PSR (Pre-sentence Report) did not ask for any enhancement, yet at sentencing a gun enhancement and an obstruction of justice enhancement were added. I was not charged with guns nor placed anywhere near guns. All objections were ignored.

I write this letter to you begging for my life. I have worked hard while incarcerated to become a better person. I have dreams and goals for my daughter and myself. I have a loving father and stepmother who long for me to be released so I can begin a new life in Fresno, California with my daughter.

In 1998, District Attorney Frank Noonan contacted my appeals attorney and stated that [my prosecutor] was no longer employed and while reviewing her old cases, he came across my name and felt I was judged harshly. He was willing to agree to a sentence reduction in exchange for dropping my 2255 motion. My 2255 was in the courts and before a written agreement could be reached, the motion was denied. Frank Noonan told my attorney he would like to help me and has no objections to a sentence reduction if I can get back in court. (There is little that can be done after a 2255).

This is why I write and beg you to review my case and see the unfair, harsh and cruel sentence I received. I hope and pray you can find it in your heart to review my sentence and grant relief.

Unfortunately, with the passage of time there is absolutely nothing I can do to reduce the sentence that was imposed in your case. I truly wish that there was something I could do, but as stated, there is nothing I can do at this time to help you.