Amy Povah conducted a radio interview with KOMO news the day Alice Johnson was set free.  We have nothing but positive things to say about Kim Kardashian’s involvement, even though the media wants to question this method.  She carried Alice across the goal line for the winning touchdown that led to her freedom, due to the hard work of many activist, like  Topeka Sam, who connected Alice Johnson with MIC for the video Op Ed that went viral and caught Kim’s eye.  CAN-DO worked with Alice’s legal team, including Kim Kardashian’s attorney for the last 8 months to bring her home.  CAN-DO has a list of over 50 names that was taken into the White House last week.  We are very excited about the possibility of more people receiving clemency and being reunited with their families. Together, we CAN-DO this!  Read the entire story here 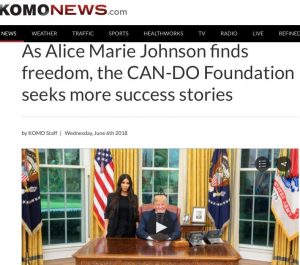