CAN-DO collected quotes from Alice Johnson, Michael Pelletier, Michelle West, Crystal Munoz, and Connie Farris, for  Steven Nelson’s article focused on Alan Dershowitz’s perspective on what it takes to get clemency from President Trump. “You have to appeal to his sense of injustice,” said Dershowitz, who often says on TV that Trump is treated unfairly in special counsel Robert Mueller’s Russia probe. “He feels he is now being subject to injustice, and so he’s very sensitive to injustices.”

“I think if you write a letter to the president and you set down the case in a compassionate way, I think his staff knows that he’s looking for cases of injustice. But you have to write it in a compelling way,” he said. “They have to write something that will catch the attention of someone on the president’s staff.”  See quotes from CAN-DO prisoners below: 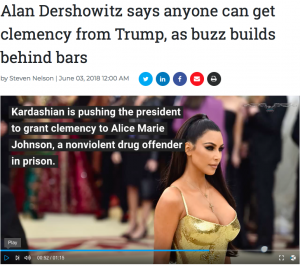 Although Johnson has not been given clemency, she remains optimistic.

“I’m feeling very hopeful after speaking with Kim about how well the meeting went with President Trump,” Johnson said in an email from prison Friday, facilitated by her longtime supporter Amy Povah, who leads the CAN-DO Foundation.

“Kim is my war angel and continues to be relentless in her pursuit of my freedom! The phenomenal outpouring of support and well wishes from the public has been a balm for my spirit,” Johnson said.

“I have strong reason to believe that President Trump is going to surprise many people,” said Povah, who attended a May 18 White House clemency event where Trump spoke in favor of second chances. “I’m tired of people attacking Trump at every turn.”

Dershowitz said there’s a method to the apparent madness of Trump’s clemency grants, which are a sharp break from the early-term stinginess of his recent predecessors.

“You have to make him say to himself, ‘There but for the grace of God go I, or other people I identify with.’ He has to feel the injustice. It’s not enough to get online with hundreds of other people showing a law was misapplied. There has to be a sense of gut injustice,” he said.

“This president may want to go down in history as somebody who has given pardons in places where other presidents would not have done it,” Dershowitz added.

“I’ve always thought President Trump would step up and finish the job that President Obama started but never completed,” said Michelle West, a clemency aspirant in prison for drug-related crimes since 1994. “My daughter, Miquelle West, went to the Obama White House for a clemency summit. In our wildest dreams we never thought that I would be passed over considering she was invited to attend.”

West said in an email relayed by Povah that “my daughter was 10 when I went to prison and I pray President Trump will consider me worthy of a second chance.”

Crystal Munoz, 11 years into a 20-year sentence for dealing marijuana, said that she, too, was hopeful, sending Povah the draft of a letter for Trump. Munoz, 38, gave birth to her youngest child in prison.

Connie Farris, a 73-year-old inmate jailed for mail fraud, said “I will never, never give up hope that our president will start releasing women such as myself and others. Please President Trump hear our cry.” Farris, seven years into a 12-year sentence, said her husband of 53 years suffers from muscular dystrophy and needs her support.

Michael Pelletier, a paralyzed inmate jailed for life since 2006 for importing Canadian marijuana into Maine, pointed out in an email that Maine now has legalized recreational marijuana. Canada is about to follow.

“The state of Maine, where I am from and was convicted, has now legalized recreational use of marijuana, so other people can now profit from selling pot without the consequences I’m currently faced with,” he said in an email shared by Povah. “I will die in prison if President Trump does not commute my sentence. Sometimes, I wonder if I’m dead already because I’m living in hell.”

Read the rest of the story here