Organizations like The National Council of Incarcerated and Formerly Incarcerated Women and Girls and the CAN DO Foundation are not only working on just prison and sentencing reform and re-entry, but are actively trying to get women out of prison.  Read entire story entitled Drug War’s Collateral Lifers Seek Freedom in the New Haven Independent. 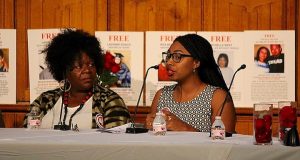 CANDO Foundation’s posters of women seeking ‘justice through clemency’ were prominently displayed behind the many  women speaking at Yale regarding the fastest growing prison population in the United States.

The audience heard from Alice Johnson, who is serving a life sentence in a federal facility in Aliceville, Alabama, through a video conference. Johnson is 61 years old and has spent a third of her life in prison. (They also heard from women currently incarcerated in Indiana.)

Johnson is a mother and now a grandmother of grandchildren she’s never seen. She never sold any drugs, never held them for anyone, never acted as a drug mule or manufactured any drugs. But she passed messages to people involved in selling drugs for money. When the feds swept in to take down an operation that she technically was part of, her life was swept away, too.

She said what she did was wrong, but so is sentencing a non-violent, first-time offender like her to life in prison. She has been in prison for 20 years. Unless she is granted clemency, she will die there.

“I’m speaking to future leaders of America,” she said. “Judges, prosecutors and maybe a future president. Yale has a history of producing presidents. Mass incarceration has failed. It’s a drain on society.”