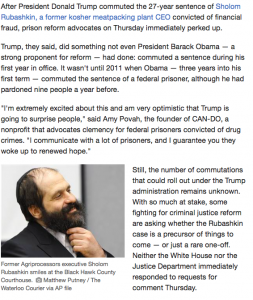 Obama’s ramping up of commutations, which lessens an inmate’s prison time, was extraordinary given the historic rarity of it all, according to advocates.

“Everybody was hoping they’d see their name on the list,” said Povah, who herself was granted clemency under President Bill Clinton in 2000 after she was convicted in a conspiracy case related to drugs. “It was like going from breadcrumbs to a huge buffet.”

Read the entire story on NBC news.  Also inside – great video of Norman Brown talking about his clemency and the need for others to receive the same.