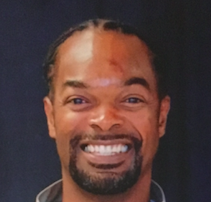 Darrell J. Triplett, Sr. was born on January 4,1969 in Starkville, Mississippi. He is the oldest of five children born to Ms. Margaret Triplett and the oldest of three born to Mr. Marion Davis. Darrell grew up poverty stricken in a single parent household the majority of his childhood. Darrell knew who his father was but didn’t see or talk to his father much when he was a child. His mother unfortunately not only had to deal with taking care of 5 children herself, but also had an ongoing battle with drug addiction herself.

Even with his mother having a drug addiction she wanted a better life for her children so she left Mississippi and moved to Pasadena, California. Darrell eventually developed a relationship with his father when he became an adult. Darrell watched his mother struggle with many odd jobs to keep a roof over her children’s heads. Due to his family’s economic condition, they did a lot of moving, sometimes yearly. Throughout the time that Darrell attended school, he was an average student. It was difficult for him to concentrate on learning in school due to domestic disparities at home. Even with the many disparities, Darrell developed a love for sports and a drama class. He excelled in both which often made him forget about his troubles at home. The class was taught by a former Actor Mr. Abel Franco.

Darrell played football, basketball and ran track. He was awarded Most Valuable Player Honors. After his junior year, he realized that his mother was entrapped by the drug epidemic of the 80’s. The struggle to keep the family together and a roof over their head got worse so Darrell began trying to find work to help assist his mother with providing for the household. To compound on the everyday issues he already had to face with his mother’s drug addiction, he also had to endure watching his youngest brother suffer with Hodgkin’s Lymphoma at the age of 16. With the stress of both of his loved ones suffering, the demands for his assistance were needed even more. Darrell unfortunately was now put in a position of being a father figure to all of his siblings. Not just because he was the oldest, but also because there were 5 children total including himself with 3 different fathers and none of them stepped up for any of the kids. That’s quite a bit of pressure to put on a young man. Darrell always made sure that his baby brother made it to all of his chemotherapy treatment appointments. He made sure to keep his brother motivated while going through the excruciating courses of chemotherapy and radiation. This was a trying period but Darrell made sure that his brother was accommodated with everything he needed. Darrell always did everything he could to keep his family encouraged and let them know that everything was going to be ok. Darrell knew that the most important thing was to make sure that the family stays together. He even contemplated quitting school in order to work full time to take care of the family. After careful thought, he knew that as a role model, it was best to stay in school. Darrell drove his siblings to school every morning and made sure his siblings stayed up on their studies. Darrell did eventually graduate from Pasadena High School. It was yet another turning point for both he and his brother. An accomplishment that Darrell at one point wasn’t sure would come. But it was now here. It was an even bigger deal for his brother that was just under him. Even though the financial struggle was still there, Darrell made sure that he got the cap and gown for his brother so that he could celebrate walking across the stage to receive his diploma. Darrell wasn’t worried about himself so much, so on the day of graduation he stood in the stands looking as proud as he could be as his brother received his diploma. Darrell knew that despite all of the struggles, he was not going to allow it to take away the joy from his brother. After high school, Darrell enrolled in a trade school Devry Institute of Technology where he had to drive 40 to 50 miles to attend. After the first year didn’t work out, he enrolled in Pasadena City College. He still was an average student because the ails at home only got worse with assistance were ever more needed so again he quit school to help keep the household together. There were many times when there was no food and the rent was due. Darrell watched as many young men and women who lived in the same public housing unit as he and his family suffer and endure the same hardships. In Darrell’s young mind something had to give. So he watched and learned the survival tactics of his environment and this is when Darrell was first introduced to selling drugs. He hated what he was doing but at that time it was all that seemed to work to keep food on the table and a roof over their head. This lifestyle and criminal behavior is what ultimately led to Darrell’s demise and landed him in prison with a life sentence as a first time non-violent drug offender. Darrell’s arrest emotionally and mentally destroyed his family, just as the drugs had done prior to his decision to sell drugs himself.

While in prison, Darrell has had years to reflect on the power of his impact on his family and friends andupon the lives of people in his community. Through Darrell’s absence, specifically being away from his children has made him understand with a greater capacity the value and importance of a Father’s role in the lives of his children as incarceration has robbed Darrell of such a sacred role. While in prison, Darrell learned to make every day count rather than sit back and count every day. From day one, Darrell took the bull by the horns. He has taken numerous self-help courses to better himself upon his release. He has taken Victims Impact (taught by Counselor Vaca at Terminal Island, Parenting Classes, Financial Independence, Entomology Course from Purdue University which he passed with all A’s. A Minister’s Bible Study Course, Business College Courses, Commitment to Change (given by Counselor’s and Administration Officials with the benefit of talking to kids in the community of the prison); Threshold (a six month course on Mental & Spiritual growth taught by Chaplain Son at Terminal Island); Mental Health Companion (a continuous course given by Psychologist Dr. R. Serranto at Terminal Island); An

Orator Skills Couse; Oil Painting and so much more. In closure, all of the above listed courses were prerequisites to the life that Darrell intends to live upon his release. The first thing that Darrell wants to do is get and work a steady job, of which there are several employment opportunities awaiting him upon his release. Darrell along with his son have entrepreneurial endeavors that consist of Agricultural Development and Distribution & Commercial and Private Real Estate Investments along with a 501 (c) 3 Economic Blueprint to help end poverty and Mass Incarceration. Darrell wants to inform other minorities of his mistakes so that they are in a position to avoid unwarranted and unnecessary setbacks in their lives.